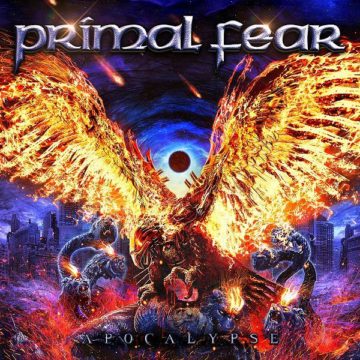 Primal Fear formed in Germany in 1997. It was and is a supergroup of European heavy metal music. Ralf Scheepers of Gamma Ray (vocals) joined up with Mat Sinner of Sinner (bass and vocals),  and the result was some very heavy heavy metal.  Apocalypse is their 12th studio album, and their first since their most successful album, Rulebreaker (2016). For Apocalypse, the band adopts the attitude “if it ain’t broke, don’t fix it”.

This is not a bad thing. Fans know what to expect with this new album, and they get exactly what they want —  hard-driving speed metal with top of the line instrumentation and searing vocals. The album kicks off in fine style with the title track, “Apocalypse”, which is more a sound collage than song. Heavy breathing, choir, church bells, and guitar sets the scene for this concept album. It is a fitting introduction to what is in store for the next 45 minutes or so.

The title of the album is basically the concept of the album, the apocalypse. Primal Fear take their audience through a nightmare of images and sounds to depict the end of times and their use of heavy metal is the perfect soundtrack to the lyrics and images. Scheepers provides the perfect vocals to deliver the messages.

“King Of Madness” is perhaps the most radio friendly and is deservedly the initial single. That does not mean it is mellow in lyrics or music, but it is the most accessible. The band still drives through the melody but the energy is there, front and centre.

A great deal of credit does go to the current lineup of  the band that helps turn Sinner and Scheepers’ vision to reality. This is the second album featuring  Francesco Jovino on drums, and his speed metal drumming is perfect for the band. He seems to be fitting in quite well and his playing has become an integral part of the band. Alex Beyrodt, Magnus Karlsson and Tom Naumann all fit the bill by providing the perfect guitar work for the album.

Fans should take note that this album comes in many variations, and depending on which you decide upon fans will get a different listening experience. The deluxe version comes with three bonus tracks, “Fight Against Evil”, “Into The Fire” and My War Is Over”, all three of which match anything on the album, and actually fit musically and lyrically with the rest of Apocalypse. The deluxe also offers a DVD that features videos for two music videos (“King Of Madness” and “The Ritual”) as well as a ‘Making Of”, all of which fans will enjoy.