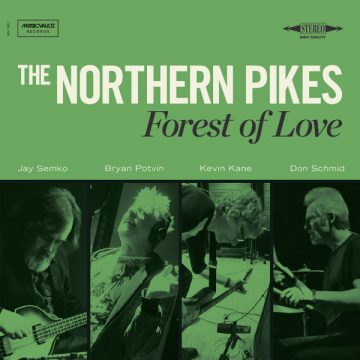 Saskatoon’s The Northern Pikes’ have released their ninth full-length studio album, Forest Of Love. It’s their first since 2003’s It’s A Good Life, and it’s a release that whets the whistle and has been worth the wait.

Joining Jay Semko, Bryan Potvin, and Don Schmid is Kevin Kane, who officially joins the band after performing in place of Merl Bryck on their recent 29-city, 30th anniversary tour of 1987’s brilliant Big Blue Sky. Kane is also of Kelowna’s The Grapes Of Wrath, another household band who got their start in the Much Music era of Can-rock.

The Northern Pikes hit the recording studio for nearly three weeks, in total, at the historic Studio Bell in Calgary, Alberta in early-to-mid 2018. This Universal Music Canada album is produced by The Northern Pikes, engineered and mixed by Graham Lessard, assisted by Eric Cinnamon and mastered by Peter J. Moore.

All songs on the album are written and performed by The Northern Pikes, with Semko, Potvin and Kane all taking turns on the lead with vocals, with the member who wrote the song doing the singing honours. This 32-minute,10-song offering from Universal Music Canada is available on digital services, CD and in a limited-edition opaque white-coloured vinyl LP.

The first single release, “King In His Castle”, is a pleasant, rocking opener which really grooves and hits a sweet spot in the music bone. It’s political overtones are clear, but this doesn’t impede the song from making one forget the downtrodden drudges of today’s political scene.

Standouts include “Forest Of Love” which is sung by Jay Semko, where hints of Leonard Cohen coexist nicely with the classic ‘Pikes’ bass sound and a positive, upbeat vibe. Schmid’s drumming really kicks into high gear on this wild ride as Semko sings “Roar like a lion/Kiss like a dove/Let’s get lost in a forest of love”.

The Bryan Potvin-led “Faith Of A Fool”, is a lively love song about reflection, relationship management, and hope. The nicely-rounded rhythmic guitar work and pounding drums are excellently placed. Potvin hits high notes as he shows off his smooth vocal range and harmonies, reminiscent of The Beach Boys and The Monkees.

Kevin Kane’s brings his best with the sixth track, “Draw From The Deck”. Fuzzy guitars, reminiscent of The Black Keys or The Sheepdogs highlight this catchy number that can’t be missed. Don Schmid’s drum work really finishes the song off nicely. With Semko’s thundering bass and Potvin’s pristine guitar work. Kane’s vocals are haunting in a hybrid Pikes/Grapes way that is really interesting and pleasing to the ear. Shades and influences of the Red Hot Chili Peppers and Radiohead’s “Paranoid Android”, can be heard if you listen closely.

One thing you can say about The Northern Pikes is that with their distinctive sound, whether it’s the precise drumming of Don Schmid, the brooding vocals of Jay Semko, or the gritty growl of Bryan Potvin, is that they have a new voice of old with Kevin Kane adding another layer of beautiful complexity to the mix. Nobody can question the marvelous vocals and impact that Merl Bryck gives to the legacy of The Northern Pikes’ foundation and songs of old. But with Bryck’s extended and quite possibly permanent retirement from the band, a chance encounter between Potvin and Kane in a Toronto guitar store a few years ago has become a fateful meeting that seemingly has injected a new energy and remarkable chapter in the storied band’s history. More music please, and thank you!

John Graham is a Vancouver-area resident who typically spends most days admiring music of all genres. When not listening to music, John is usually at a live show, somewhere in the bowels of Vancouver.
RELATED ARTICLES
album reviewalbum reviewssaskatoon
8.0