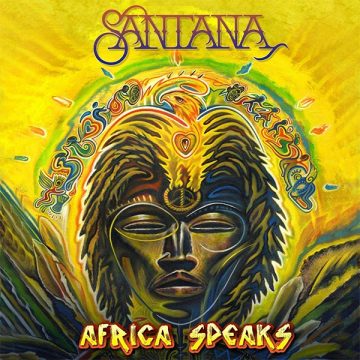 Returning with his first album since 2016’s Santana IV, guitar innovator, virtuoso, and legend Carolos Santana has released Africa Speaks. Produced by Rick Rubin, the 11-track album – released ahead of his summer Supernatural Now tour and his on-and-off residency at Las Vegas’ The House Of Blues – marks Santana’s 25th record of original material. This feat is only surpassed when considering the sonic quality of Africa Speaks, a collection of music that only continues to enhance the name and reputation of Santana, while continuing to push any and all musical limitations.

Upon the opening of title track “Africa Speaks,” one hears a blend of rhythmic percussion, spoken word from Santana himself, wailing guitar, and raspy vocals sung in Spanish in unison with the distinctive, one-of-a-kind guitar tone. In this moment, the listener is transcended: music becomes your religion; Santana, the pastor; and Africa Speaks, today’s sermon. As the band seemingly warms up for three minutes, the song truly kicks in with a guitar solo set over Latin and African rhythms and continues to grow from its grand opening. While the way that the opening track grabs the listener could be endlessly discussed, the album continues to roll forward.

A musical marvel, Santana blends elements of rock, jazz, the blues, Latin, funk, and pop music together in a seamless fashion… just as he has always done. “Batonga” stands as a Latin rock odyssey rich with a deep sense of melodicism along with a series of solos, ranging from percussion and organ to Santana’s ever-present lead guitar lines. His riffs seem to run with a sense of abandon underneath the whole song without managing to step on anyone else’s toes. Quite contrastingly, “Yo Me Lo Merezco” stands as a strong, slow-burning pop ballad while “Breaking Down the Door” has a quality to it which sounds as if it was pulled straight from a Latin standards book.

Santana’s ability to push the stylistic boundaries through his compositions is only rivalled by his incredibly unique voice as a guitarist. He weaves together chords, rhythm, and lead lines with jaw-dropping solos… all the while delivering some of the nicest tones you’ll ever hear. It must also be noted that he leads one of the – if not the – tightest ensembles to be heard on record in quite some time.

Still reeling from the opening track, I realize my room has gone quiet. The album has come to a close, and while I am unsure as to how long I have been sitting here since the final notes of “Candombe Cumbele” have rung, a feeling of transcendence sits with me. Africa Speaks is a true masterpiece – something that Santana, even well over fifty years into his career, seems to turn out effortlessly.

A passion for music has always been a part of Gerrod’s life. As a young boy, he was raised on a steady diet of the music from The Chili Peppers, Aerosmith, The Stones, Prince, and others from his mum. Raised in the GTA, Gerrod continued to foster his love for music by attending a wide range of concerts and learning the drums. His unapologetic passion for music has no bounds and has spread to a wide variety of styles, whether it be the 90’s rock that sound tracked his teenage years, the jazz he studied in university, or his newfound love for hip-hop. He recently received his bachelors in music and education from York University and is passionate about writing and reviewing good (and less than good) music. Gerrod is also the drummer and songwriter for a Toronto based rock & roll band, One In The Chamber.
RELATED ARTICLES
album reviewalbum reviewscarlos santana
8.0