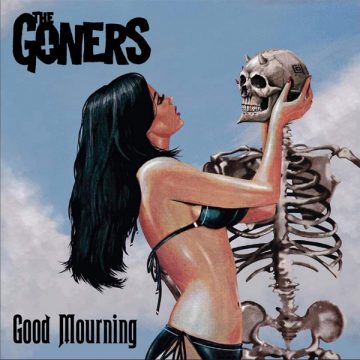 Simply put, The Goners are one of the coolest and heaviest garage rock bands I’ve heard in years. Not since first hearing Uncle Acid and the Deadbeats have I been so pumped for new music. The Swedish band features former members of stoner rock royalty Salem’s Pot and members of Yvonne. The potent combo of players sounds like an experienced (and pissed off) garage/punk rock outfit from the late ‘70s.

Digging into this debut album titled Good Mourning, it’s clear the band properly laid the groundwork for tone, feel, and groove with heavy guitars, low-fi production and absolutely punishing drums. The band’s DIY approach is in your face and sounds like these guys have all been around the block a few times over. An album with this kind of authority is a rarity in today’s music business and all eyes should be on this group in the near future.

The opening track titled “Are You Gone Yet” is clearly one of the front-runners of the album. From the killer (live off the floor) performance to the ear shredding guitar solo and fierce punk rhythm, this tune truly personifies the band as a sonic unit. “High Low and Never in Between’” delivers some VERY dark, horror moviesque tones and feel. The track is loaded with somber chord changes, minor chord changes, and a macabre set of lyrics about murder. “World of Decay’” delivers a sinister swing and more haunting lyrics surrounded by sludgy guitars that perfectly bookend the opening tracks.

As we get deeper into the album, “Down and Out” takes a style departure at the three-minute mark with an eclectic Middle Eastern style interlude, taking the audience on a bit of an acid trip before resuming the all-out sonic anarchy of wide-open washed crash cymbals and endless layers of guitar solos for a serious ending crescendo.

Nearing the end of the album, a crushing tune titled “You Better Run” kicks the album back into fourth gear with a heavy punk riff followed by a wicked Sabbath-style half time interlude after the first chorus. Concluding this incredible debut album is a very dark track titled “Dead in the Saddle (Dead Moon)”. It opens with the sound of howling wind and a fierce lead guitar riff plucked straight out of the psychobilly riff book. This song would go over well for fans of The Matadors.

If you’re looking some fresh garage/indie/punk vibes, look no further than Good Mourning. All aspects of this release get top marks. Simply put — “Amazing!”

Andre has been writing for The Spill Magazine for over 12 years, dating back to the print days. His passion for music goes far beyond writing reviews for new music and live concerts, he is also an active musician and producer on the Canadian music scene. Having toured North America and Europe with various acts, he is no stranger to dedication and work ethic new bands must endure to make the grade in today's market; Andre always delivers perspective writing that is authentic and to the point. Mr. Skinner typically covers indie rock, grass roots, electronica and is our resident hard rock and heavy metal specialist. He is extremely selective on what bands he covers for articles and you can rest assured they are ALWAYS band to watch with something left of centre to offer.
RELATED ARTICLES
album reviewalbum reviewsridingeasy records
8.0