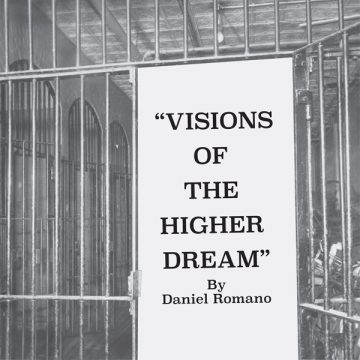 You have to love Daniel Romano. The prolific artist does not let anything slow him down, including self isolation. Here is an  album that will only be available for fourteen days, his own self-isolation time period. He has created an album for all of us to enjoy during this chaotic time, and in the process, he has come up with one of his best albums. The album releases exactly two weeks before the release of his new live album, Okay, Wow. Daniel Romano fans have a lot to look forward to.

Romano is no stranger to short term, download albums. In 2018 he released two albums, Human Touch and Nerveless, that were only available for one month. Visions Of The Higher Dream, even less time, so enjoy while you can.

One never knows what to expect from Romano. His last album, released under the band name Ancient Shapes, featured very hard sounding songs. Here, he has come up with  some of his most melodic work to date, combined with some genuine surprises. He sets the tone with the opening track “Where May I Take My Rest” that starts off with a catchy hook, and a melody that would not be out of place on a Harrison solo album circa 1973. It abruptly cuts to some very unusual beat structures. It is jarring and brilliant, which basically describes this album. This is not Americana, or country, or folk, but rather a blend of his influences to create his own solid style of rock.

Moving into track two, the wonderful “I Cannot Be More Lonely” tastefully features an amazing horn section. Again, strong melodies and a strong arrangement means a great song. Moving on,  “Lilac About Thy Crown” has the ghost of George Harrison hovering about, but it is clearly still his own song and sound. Then later, the horns make a reappearance on the wonderfully titled “Nobody Sees A Lowered Face”. The point is, that the album is all over the place, yet is cohesive in its own way.

The country Romano is gone, and he is producing amazing music at an alarming rate, like the older artists of days long ago. Romano is an icon who keeps exploring and expanding his sound. This album is full of incredible songs, each one is better than the one before. It also cries out for repeated listening.

In Romano’s own words, “Stay home, enjoy!” I kinda wish he was self-isolating for much longer time than 14 days. You have been warned, this is a time limited offer. Download or stream, and enjoy.

Born and raised in Whitby, Aaron discovered music through his love of The Beatles. This led to a career in radio, writing for various publications, and ultimately a radio show about The Beatles (Beatles Universe), which ran for over four years. When not immersed in music, Aaron enjoys spending time with the loves of his life -- his wife Andrea, and daughters Emily and Linda (all of whom have an intense love of music too).
RELATED ARTICLES
album reviewalbum reviewsdaniel romano
7.0