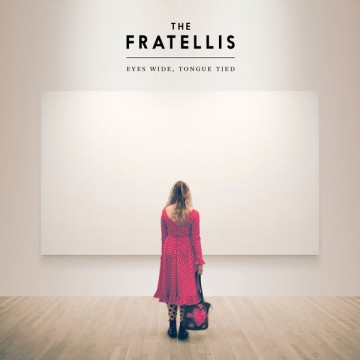 The Fratellis’ fourth album, Eyes Wide, Tongue Tied, is easily their best to date. Each song requires at least two listens – the first to take in the new sounds, fusion of instruments, and familiarly fun lyrics; and the second to fully appreciate the masterful lyrics coupled with playful strength of the musical arrangement. We can’t forget how popular “Chelsea Dagger” became, and what seemed like the Fratellis’ signature stadium anthem sound. It would have been easy to allow that song to degrade them into one-hit wonder status, another Brit-Scot tragedy of too many songs all about the drink. But the band has proven they are more than a one-trick group with the release of this album. “Eyes Wide, Tongue Tied” is a more refined, mature offering. Not that the band has strayed all that far from their roots – some of this album is still as nonsensical and borderline cliché as any of their previous work – but on this album, for me, it works. Eyes Wide, Tongue Tied opens with “Me and the Devil,” where Jon Fratelli tells us “I’m going to sell this soul of mine.” While that might sound like every other song we’ve heard where a similar line is uttered, the mix of piano and drum beats allow The Fratellis to claim this as their own. Fratelli opens up his vocal range in this song, with sounds reminiscent of California sunshine. It could have stayed dark as it begins, but hope is found by the final note. The piano and bassline draw the listener in reinforces how charming this band can be. “Baby” is more anthemic, and what you would expect from a band to follow “Chelsea Dagger” with. Frat boys around the country are undoubtedly fist-pumping to “Baby’s” beats, and singing its chorus long after last listen. It’s this song, with its singable lyrics and danceable tones, that remind you why we began listening to The Fratellis 10 years ago. Will any song on the album achieve “Chelsea Dagger”-like success? Probably not, but this is still a really well-written album that should be recognized as a significant move forward for The Fratellis. With all the noise in our daily lives, it’s not often we make the time to sit down and truly listen to a record from beginning to end, but I found myself doing just that with “Eyes Wide, Tongue Tied.” I suggest you do the same.

Lucy Rendler-Kaplan is a native Chicagoan, recently returning home after 10 years in Los Angeles. Having worked in field marketing for the past 17 years, Lucy recently left corporate America to work as a consultant. When not running, Lucy can most often be found out with her dog, watching an NFL game, or listening to live local music. Passionate about writing, Lucy enjoys writing about music in lieu of playing it.
RELATED ARTICLES
album reviewseyes wide tongue tiedthe fratellis
9.0