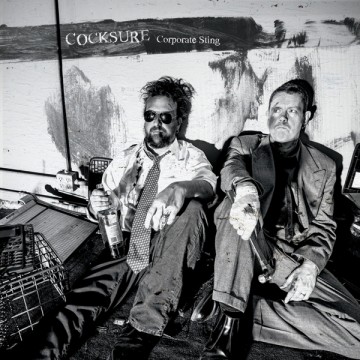 Corporate Sting is a collaboration between Chris Connelly (of, among numerous others, Revolting Cocks fame, which I’m guessing was the impetus for the band name) and Jason Novak, perhaps best known for Chicago-based industrial band Acumen Nation.

The ten-track album has been lauded as a rebirth of the original Wax Trax! sound. I didn’t really get that, but when I think “Wax Trax!”, I think of Front 242, the Revolting Cocks, the Thrill Kill Kult, KMFDM, Mussolini Headkick, etc. This album isn’t quite on the same wavelength as those bands. Corporate Sting certainly is respectable in its own right, and I absolutely adore Connelly’s vocals and the backing soundtrack, which included experimental-sounding industrial noises, what sounded like samples from a movie, and lots of great electronic beats.

The album often makes use of distortion on the vocals and includes tracks with a steady beat as well as experimental industrial-sounding “noise” art. At times, I was reminded of a rap beat, but it would probably be more accurate in citing similarities to bands such as Murder Inc.(which happened to be made up of the members of Killing Joke minus Jaz Coleman – who was replaced by Chris Connelly, featured on vocals – and with the addition of Paul Ferguson). Featuring a dark new take on “Harold and Cindy Hospital” by Australian band Severed Heads, the duo pays homage to one of their forerunners.

All in all, a worthwhile effort and an enjoyable listen!

Kathy Nichols, from the land of cheese and beer, has been writing off and on since elementary school. Her passions include hugging trees and trying to make a positive difference in the world, to which end she completed a degree in Mass Communications coupled with Environmental Science. Kathy appreciates all types of music, mainly industrial and punk and the like (especially bands who use their fame and fortune to try to make social or political statements), but with a little bit of Beastie Boys and Billie Holiday thrown in to switch things up a bit. She is the owner and CEO of www.industrialstrengthpublicity.com and enjoys long walks on the beach and (skinny) puppies.
RELATED ARTICLES
album reviewschris connellymetropolis records
8.0