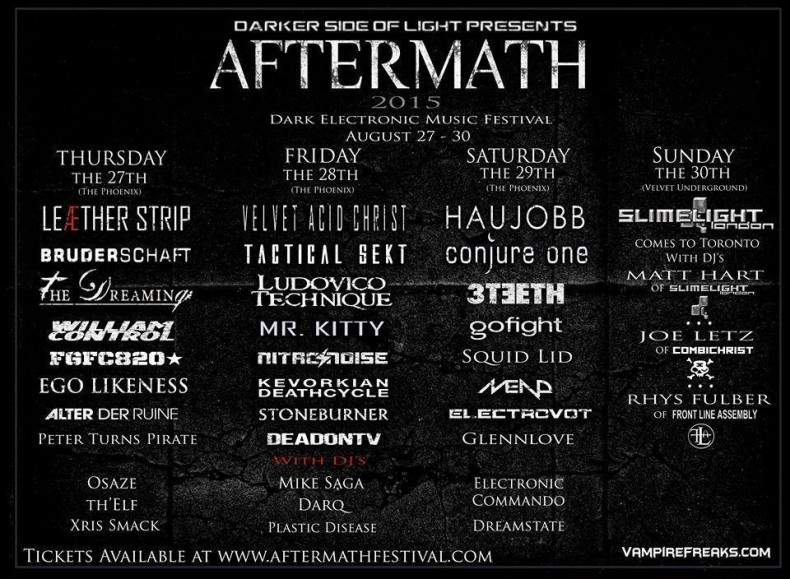 Aftermath 2015:
Aftermath’s 2nd Edition To Be Held In August

If you didn’t have already a summer music festival to attend this year in Toronto, get ready to finish August with a high, dark note. Toronto will be once again the lair of darkness in North America with the second edition of the Aftermath, the resurrected Montreal’s Kinetik festival, now boosted with the best of the electro and alternative dark music worldwide and many special featured events during the four most gloomy days in Toronto this year.

The line up of this second edition includes cult dark bands like Velvet Acid Christ, Leather Strip and Haujobb. Plus, the already acclaimed Canadian project of Rhys Fulber, Conjured One, wrap up the heading line up of the festival that will also bring a team of special DJs from London’s Slimelight in the last day of the festival. The gigs will happen in the Phoenix Concert Theatre from August 27th to 29th. The last day will happen exclusively in a different venue for the DJ’s nights, in the Velvet Underground.

As a themed music festival, the Aftermath is favored with the availability of most iconic musicians of dark electro currently. Leather Strip will be the main attraction in the first day of the festival that will also present bands like The Dreaming and William Control. Leather Strip will be the veteran act of that day, formed in the late ’80s, the project lead by Claus Larsen is one of the most influent projects on electro-industrial and EBM. Following his style, the electro darwave/new wave punk of William Control promise this first day to be a combustive one. William has been rising to prominence in the last years and is likewise one of the most anticipated performances of the festival.

The second day will be more accessible with more pop alike performances of the alternative ’90s cult Velvet Acid Christ, the dark synthpop of Mr. Kitty and The Ludovico Technique, even though fans of aggrotech can check out the praised Tactical Sekt in the same day.

The third day will be oriented for more traditional industrial acts, like the cult German Haujobb. The band has been one of the most important acts in the industrial music since the early ’90s but has not released new works under their official name since 2011, so they will as well be more focused on performing their classics in the festival. It is a great and rare chance to check the German duo in Canada and you can also check they perform songs from their sideprojects like Destroid and Architect. This night you will also see Conjured One and check Rhys most accessible works this day because in the Sunday 30th, Rhys will show up once again, but as a DJ, besides many other Londoner names of the Slimelight nights.

You can get your tickets for all or any of the nights through the Aftermath Official site http://aftermathfestival.com/ as well as you can check the complete line up and more about the venues where the festival will be held. There are more than 30 artists besides the big names heading the festival, as well as other events inside the festival to be yet announced.

SPILL NEWS strives to keep our readers up to date with news and events in the music industry. We keep you informed of the most recent information regarding new releases, tour dates, and information items about your favourite artists.
RELATED ARTICLES
aftermathfeaturesfestival