SPILL ALBUM REVIEW: THE DREADNOUGHTS – INTO THE NORTH 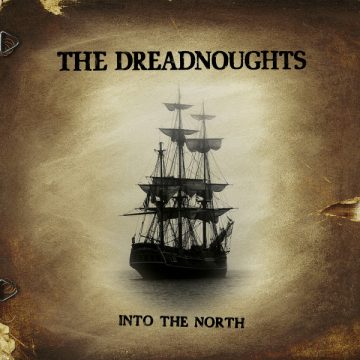 The Dreadnoughts
Into The North
Stomp Records

Vancouver folk-punks The Dreadnoughts set sail on an ocean of booze with their latest release, Into The North. An album of reworked sea shanties and originals, it captures the heritage of a century past. It’s a rousing love letter to the roots of folk music, Canadian pride, and of course, slinging back ciders.

Minimal instrumentation is the backbone of the Into The North with squeeze box, mandolin, guitar, fiddle, drum, and a healthy dose of foot-stomping. Their vocal harmonies are so good that at times it’s hard to differentiate between songs sung by sailors in the early 1900s and songs recently written by The Dreadnoughts. The album spans from hilarity to melancholy, and they do it with pride, finesse, and authenticity, making it a delightful success.

One of the standouts is drinking song “Joli Rouge”, an ode to the cidery of the same name in Chicoutimi, Québec. Their recently released Dreadnought Cider honours the band, and the band returns the favour in this robust love song, proclaiming it far superior to better-known brands of the drink.

“Dear Old Stan”, an ode to celebrated musician Stan Rogers, gives the man himself credit for the formation of The Dreadnoughts. This requiem of sorts is followed by a worthy cover of Rogers’ indispensable contribution to Canadian folk, “Northwest Passage.”

The instrumental “Harper’s Frolic/Bonny Kate” shows off the band’s prowess as masters of traditional folk without anything to distract the listener. Much like the rest of the album, it confirms their ability to instill heritage music with a flavour of their own.

Fans of the ballads or more folky tunes by Flogging Molly, Dropkick Murphys, and Gogol Bordello will revel in this album, but should look to their other releases if they’re thirsty for punk rock bangers.

SPILL ALBUM REVIEW: THE DREADNOUGHTS – INTO THE NORTH