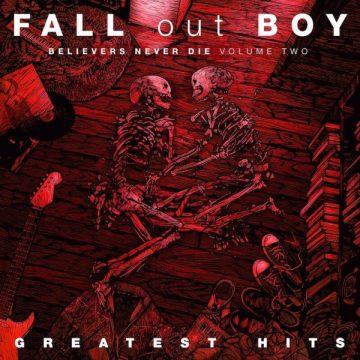 Multiple platinum-selling, Grammy-nominated Fall Out Boy is at it again with yet another compilation album release Believers Never Die Volume Two. The compilation album features the single “Dear Future Self (Hands Up) “ ft. Wyclef Jean released and Bob Dylan.

While only a compilation album, it has exceeded what the first one tried to do over 10 years ago. It shows unique progression and growth in ways that few bands ever really get to experience. Fall Out Boy is an alternative monument: regardless of whether one chose to vibe with their musical style choices or not, they have been very fortunate to have stood against the tides of time and still remain special and relevant to so many fans and the music industry as a whole. Because of how this album is set up we are taken for a trip down memory lane with strong, dynamic opening tracks such as “ My Songs Know What You Did In Dark (Light Em Up)”,  to more instrumentally infectious tracks like “Phoenix” , to fun yet odder releases such as “Uma Thurman”.

Fall Out Boy has never been one to stick to a style of music and have very much been a band that moves to the beat of their own drum, and this compilation is a musical metaphor for that. Creatively, they have delved into genres vocally and instrumentally that few bands dare to venture off into and have been all the more successful because of it.  Fans will appreciate this album for those reasons plus two bonus unreleased tracks that show the band is still thinking about their fan base by leaving them with something worthy of purchasing the compilation album. Both tracks are once again different from what fans have really experienced up to this point and is also a great start showing what’s to come for this band next year. While a musical memory of great releases at its core, it will leave fans craving for another album long after it is finished.