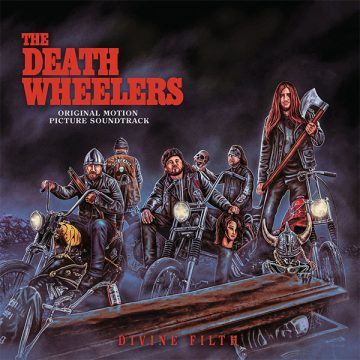 If you’ve never heard of The Death Wheelers, they are a motley band of Canadian misfits who play a unique brand of doomy surf-rock. The band’s latest release, Divine Filth, is loaded with high-octane, horror-inspired songs that were originally cut for a movie soundtrack that never saw its release.

The audio assault begins with a dark ‘80s horror-inspired synth intro that could easily be part of an epic monster scene in Stranger Things. As the macabre build-up comes to a climax, the band kicks in with a seriously heavy halftime groove, delivering mountains of guitar, bass, and drums preparing the listener for what dangers lie ahead.

The first of many horror movie samples appears at the beginning of the third track, “DTA-Suicycle Tendencies”, a tune that properly kicks off the album. An uptempo psychobilly doom track that would be perfect for a car chase scene in any action flick.

The next face-melter is the title track, that busts out with scorching guitar and bass riffs, topped with absolutely punishing drums. The track jumps back and forth between full- and half-time grooves bringing some dynamics to the ear. At 230 bmp this track can definitely be categorized as doom punk.

The Deathwheelers decide to bring us some funky grooves with the song “Motôrgasm (Carnal Pleasures Pt. 1)”, a tune that starts slow with a strumming wah effect on the guitar that is eventually joined by the full band. The tune rolls into an epic guitar solo that takes the audience on an intense journey that lasts well over four minutes.

Taking the belt for the best song title of the record is “Chopped Back To Life”. The song once again opens with a horror movie-inspired quote–“You wanna fuck with the living, you gotta learn to fuck with the dead”. This psychobilly death trip is definitely one of the album’s standout tracks and truly highlights the band’s musical chops as it’s loaded with technically-syncopated riffs and rolls from start to finish.

A serious guitar hero moment can be found in the song and album’s closer, “Nitrus”. This song kicks off with Judas Priest’s Painkiller-style guitars and drums that will blow your 1980’s JVC speakers right out the window. At the halfway mark the drummer shows up for dinner and rips into a blistering Alex Van Halen style solo before bringing the band back for the final stanza of what may be the best track of the album.

With a ‘70s live-off-the-floor production style, I would say Divine Filth would be best served on vinyl and cranked up to 10! Top marks for a truly authentic analogue sounding album with great songwriting, tight performances, and an incredible horror movie-inspired album cover.

Andre has been writing for The Spill Magazine for over 12 years, dating back to the print days. His passion for music goes far beyond writing reviews for new music and live concerts, he is also an active musician and producer on the Canadian music scene. Having toured North America and Europe with various acts, he is no stranger to dedication and work ethic new bands must endure to make the grade in today's market; Andre always delivers perspective writing that is authentic and to the point. Mr. Skinner typically covers indie rock, grass roots, electronica and is our resident hard rock and heavy metal specialist. He is extremely selective on what bands he covers for articles and you can rest assured they are ALWAYS band to watch with something left of centre to offer.
RELATED ARTICLES
album reviewalbum reviewsridingeasy records
9.0