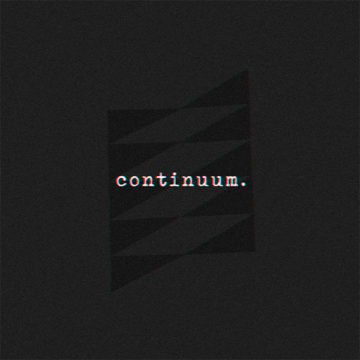 Hailing from New Jersey, The Components have released their explosive debut record, Continuum. The duo, consisting of Ronnie Sena on lead vocals and guitar and Zoe Ekonomidis on drums and backing vocals,  bridge together elements of hard rock, metal, and punk to create a strong debut that will spark a sense of excitement around the band and their future.

Opening with the hard hitting riffs and screams of “Parliaments & Witches”, a brutal track that feels like you took the heaviest Foo Fighters track and then proceeded to pump it full of steroids. It helps that Sena’s vocals – especially when he belts outs – shares a tone similar to that of Dave Grohl, however what is most impressive about this comparison is that The Components is made up of two people who are capable of creating such a powerful and full bodied sound that it can be compared to one of the biggest rock bands in the world – one that also happens to have six members, triple that of The Componets. With such a powerful sound, it only makes sense that Continuum be a very heavy record featuring songs of the likes of the bouncy “Filthy”, the punk thrasher “Spirits Help”, and the hard rock of “Ill Bandito”. The closing track however, “Glass Haus”, stands out as – or at least one of – the best tracks on the record with its beyond catchy riff and transition from the songs upbeat pace to a sludgy halftime section in the middle.

While it is also easy to make the comparison to Royal Blood – another rock duo who are quickly climbing the modern rock totem pole – what I really appreciated about Continuum was the melodic passages that the band included. Rather than ride their wave with only hard riffs and power chord driven bangers, The Components indulge in a deep sense of melody which gives their work a greater sense of versatility.  These passages are best heard during the introduction into “Filthy”, and the incredibly dark, haunting, and ambitious “Interlude”.  Their attention to melody not only adds another dimension to the record, but it creates a much richer listening experience, further adding to the band’s unique style that is largely driven by punk styling’s, but features a number of rock based elements.

The Components make a rather strong debut with Continuum, an eight track album that refuses to let up with heavy and rhythmic riffs.  Despite it pulling no punches, the record also showcases a deep and mature song writing voice between Sena and Ekonomidis that not only makes for a dynamic album, but it will leave you excited for the band’s next step forward.

A passion for music has always been a part of Gerrod’s life. As a young boy, he was raised on a steady diet of the music from The Chili Peppers, Aerosmith, The Stones, Prince, and others from his mum. Raised in the GTA, Gerrod continued to foster his love for music by attending a wide range of concerts and learning the drums. His unapologetic passion for music has no bounds and has spread to a wide variety of styles, whether it be the 90’s rock that sound tracked his teenage years, the jazz he studied in university, or his newfound love for hip-hop. He recently received his bachelors in music and education from York University and is passionate about writing and reviewing good (and less than good) music. Gerrod is also the drummer and songwriter for a Toronto based rock & roll band, One In The Chamber.
RELATED ARTICLES
album reviewsmint 400 recordsnew jersey
8.0