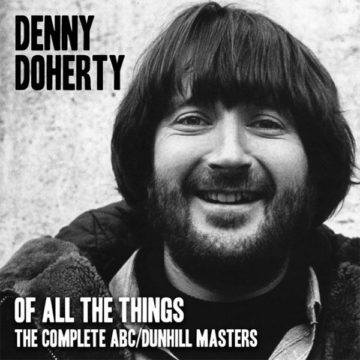 Once the group split, Doherty signed a solo deal to ABC/Dunhill Records, which happened to be the label to which The Mamas & The Papas were also signed. Doherty released one album (Whatcha Gonna Do?) and one non-album single before he was dropped by the label. Real Gone Music has put together the definitive collection of this time period of Doherty’s solo career. Of All Things — The Complete ABC/Dunhill Masters features Doherty’s ABC/Dunhill album, single, and five previously-unreleased songs from this time period.

Whatcha Gonna Do? is an album that has been out of print since 2002, and even then it was only available in Japan, so this reissue is very much welcomed by fans of Doherty and The Mamas & The Papas. This album demonstrates that when he was out of The Mamas & The Papas, Doherty was able to explore folk-pop more than he could within the band.

Songs like “Tuesday Morning,” while appearing simple, is actually very experimental, unique, and a very interesting song. Kind of a Harry Nilsson vibe, but Doherty makes it his own. Other songs have aged well and in 2018, it is still fun listening. But even more interestingly, the album is full of songs that were folk-pop or country-pop before many artists of the second half of the 1970s.

Doherty did have help with the album. Barry McGuire, Russ Kunkel, Buddy Emmons and Eric Ford are just some of the top session players contributing to the album. The album Whatcha Gonna Do? was also produced by future Eagles producer Bill Szymczyk. Elsewhere, the unreleased tracks feature Spanky McFarlane (of Spanky and Our Gang).

What is clear is Doherty’s love of folk music and melodies. He would revisit this in his future solo projects, but here he is free from the others in this band. He picks excellent songs to cover and the end result is a rather pleasant album. Not the best album ever made, or an album to have a heavy statement (truthfully the album does suffer from a hippie mentality, but you can get beyond that with the songs), but that is the point. Doherty simply wanted to make pleasant music and perhaps expose his fans to other forms of music they do not always hear. For that he should be applauded.

It is a good album and one that I have not heard in a very long time, but, like most old friends, the return is always welcomed as one gets older and the album sounds that much better. A very worthy reissue and a well-put-together compilation album. Forget The Mamas & The Papas, and dig Denny Doherty, circa 1971.

Born and raised in Whitby, Aaron discovered music through his love of The Beatles. This led to a career in radio, writing for various publications, and ultimately a radio show about The Beatles (Beatles Universe), which ran for over four years. When not immersed in music, Aaron enjoys spending time with the loves of his life -- his wife Andrea, and daughters Emily and Linda (all of whom have an intense love of music too).
RELATED ARTICLES
album reviewsreal gone music
9.0