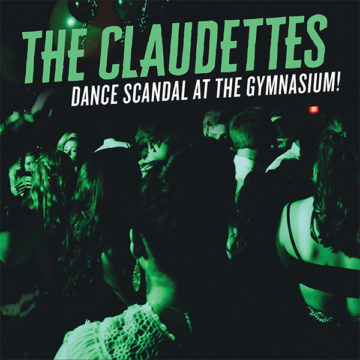 The Claudettes
Dance Scandal At The Gymnasium!
Yellow Dog Records

The Claudettes are a very special group. They’re putting out music that sounds unlike like anything out there now. The group consists of Johnny Iguana on piano and as chief songwriter. Berit Ulseth is the siren singer of the group, with a voice that just lures you in. Zach Verdoon is the driving bassist and a second singer while being the occasional guitar player as well. Danny Yost is the man keeping it together with the drums. Together they create the ultimate fusion of music.

They have roots in the bluesy jazz groups of the past, the classic rock ‘n’ roll from the beginning, current folk influences, some country mixed in, and something special that is simply impossible to place. The group has a very unique sound that cannot be emulated at all. Their newest album, Dance Scandal at the Gymnasium! really is a true masterpiece. It doesn’t contain a single bad song.

The album opens with “Don’t Stay with Me” to set the tone. I’s got very incredible piano riffs combined with slide guitar, gorgeous vocals singing powerful lyrics, driving drums that just get the feet stomping, and it even sports a couple solos. A few tracks later and you get “Pull Closer to Me”, a little slower, but still powerful song. It sports both Ulseth and Verdoon harmonizing beautifully. The slowed down pace is perfect for the slow song at the school dance the album seems to be referencing. It’s a very emotional love song that fits perfectly right here. “Dance Scandal at the Gymnasium” follows right after. It’s often said that songs are supposed to mimic a roller coaster in design. This track does that perfectly by starting with a jazzy intro then picking up at a more rocking pace. It’s an incredible musical number with the only lyrics just being little vocal intrigues that help to drive it along. Then it slows down for the return and for everyone to exit the coaster. It marks for the perfect song to fit into the middle of the album. It is very deserving of the titular name. Another unique aspect of this is that it is very rare that the titular track has no words.

Well, the Claudettes are a unique band and they just made it work. The whole album is simply magical. It’s unlike anything I’ve heard before.

The Spill Magazine is a Toronto-based online publication dedicated to covering the independent music scene with a strong focus on our thriving hometown talent. Our writers bring you up-to-date news, in-depth features on musicians and reviews for the latest CD releases. We also travel to the front lines for all local festivals including Canadian Music Week and North by Northeast. Don’t forget to check out our Facebook and Twitter pages for all daily Spill updates.
RELATED ARTICLES
album reviewsthe claudettesyellow dog records
9.0