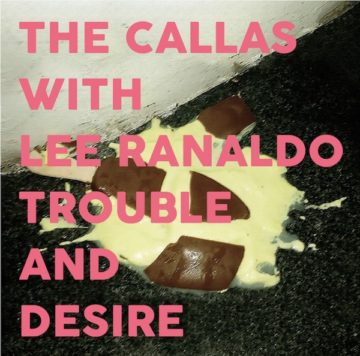 Lee Ranaldo could not have found a better outfit to collaborate with than The Callas. I’m not sure about other releases they may have, but on Trouble and Desire they sound very much like Evol-era Sonic Youth. Greek brothers Lakis and Aris Ionas describe the band as “an art collective” which is fitting for them owning a gallery in Athens, Greece where they produce films, magazines, visual art and music amongst other things. The band are Aris on guitar/vocals, Lakis on bass/vocals, Chrysanthi Tsoukala on drums/vocals, and Marilena Petridou on percussion.

The album splits the proper songs apart by numbered interludes each called “Octopus No.x” and range from 26 seconds to a little over a minute. Each is a little ambient trip between the tracks. The regular songs all interplay vocal duty between male and female equally, so there is no “lead” vocal which is a nice touch. Ranaldo doesn’t overshadow anyone in The Callas but melds in rather nicely. Tracks like “Μελανιά”, “Acid Books” and the title track all have a certain air of that early 90s punk/college radio sound. Combine it all and you have one hell of an album full of anthemic sing-a-longs with an arty glue holding it all at the seams.

Michael Mitchell's love of music started at an early age and slowly became an addiction that courses through his veins to this very day. It is guaranteed that if you are in his proximity, he will try to get you to travel to the nearest record store and make you buy beyond your means. His wife and two children acknowledge his problem and continue to encourage him into rehab. He currently writes for Torched, Stereo Embers, God is in the TV, ReGen and Spill magazines.
RELATED ARTICLES
album reviewalbum reviewsdirty water records
9.0