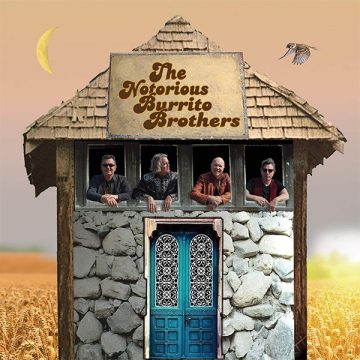 The longest-standing member of this current incarnation is Chris James, joining in 2010 when the name was shortened down to simply The Burrito Brothers. Had it all been under a different name we would not be here talking about it, but here we are.

What one will find here is an impression of late Eagles and ‘80s new country, weaving in and out of the slick production with catchy hooks. The album title itself, The Notorious Burrito Brothers, is a nod to the album from The Byrds with a similar name. The centerpiece, “Love Is A River”, is long and epic with choral sitars, reminiscent of “Wild Horses” and “To Love Somebody.” A lot of stops and starts demonstrate a discipline not too common in the world of The Burritos, and may be subject to criticism from the purists, but they don’t call themselves “Notorious” for nothing.

“At The Dark End Of The Street” is a James Carr cover, and made a significant inclusion on the 1969 record The Guilded Palace Of Sin.  It is one of those dark, cheating songs, perhaps to please the older folks that are simply glad someone is out there is doing it. One can hear the influence of Roger McGuinn here, along with a synth vocoder, going back in time to the sound of the ‘70s.

“Do Right Woman”, originally covered by Aretha Franklin before The Burritos put their stamp on it, is updated here with the title “Do Right Man” featuring the vocals of Ronnie Guilbeau. His father, Gib Guilbeau was in the band in the ‘80s before Ronnie came along in the ‘90s. Previously, it was of course Gram Parsons and Chris Hillman that got the whole movement going in the  Americana underground. However, for the purists here, there are plenty of Easter eggs embedded in the good songs.