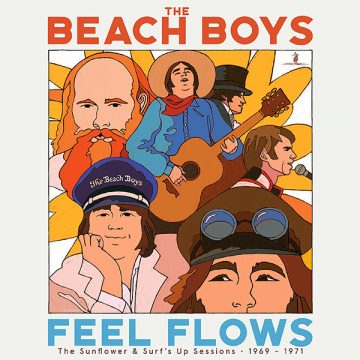 The post-Smile era Beach Boys is one that is often overlooked by the general public. Albums like Friends & 20/20, both lo-fi masterpieces, often receive no mention because the lack of input from creative mastermind, Brian Wilson. Taking the reins of these releases were his two younger siblings, Dennis & Carl.

It is on Friends that the two brothers really take the lead on both writing credits as well as arrangement and vocals. During the Sunflower & Surf’s Up era this trend seemed to be continuing as it looked as though the Beach Boys would have new creative leads as they entered the 1970’s.

This Feel Flows box set includes both Sunflower & Surf’s Up in their entirety along with over five hours of bonus material.

Dennis Wilson fans will be thrilled to realize many of his deep cuts make the final cut of this six-hour plus compilation. Tracks like “Barbara”, “Lady (Fallin’ in Love)”, “Celebrate the News” and “Wouldn’t It Be Nice to Live Again” are included on this monstrous deluxe release. The fact that the latter Dennis track was not included on Surf’s Up yet “Student Demonstration Time” was is still a fucking travesty. Dennis’ songs are finally presented here in a non-bootleg format and it’s about damn time.

While Dennis & Carl’s presence cannot be understated on these sessions, Brian’s “Break Away”, not to mention his other Sunflower tracks, are clearly some of his finest post-Smile compositions.

This box set captures the Beach Boys near the end of their last truly creative period. In 1974, with the success of Endless Summer, a compilation featuring singles from 1962-1965, the group became oldies act overnight and put a hold on the flourishing talents of Dennis and Carl. Mike Love, who relished their newfound popularity, had begun his stewardship over the group as they toured the hits of their youth once again.

Feel Flows encapsulates the group when they were still willing to experiment with new sonic landscapes and shows Dennis and Carl at the peak of their creative powers within the group.

As a child growing up in the suburbs, Ryan found music as a way to soothe his boredom. After first hearing AC/DC at the age of 10, he was hooked on music. Tracing its roots to the ‘50s, he became obsessed with Elvis, Buddy Holly and Chuck Berry. Somehow that led to grunge, then psych-rock, then jazz, etc. The list goes on and on and his collection of vinyl records continues to grow.
RELATED ARTICLES
album reviewalbum reviewscapitol records
8.0