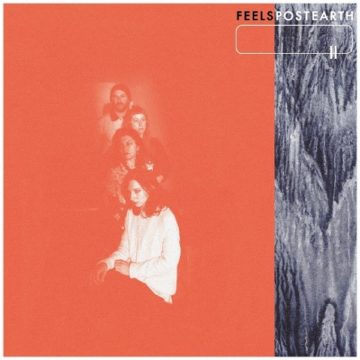 The LA-based band FEELS loudly avows their voice and presence within the punk electronic scene through the announcement of their second album Post Earth, which will be released on February 22 via Wichita Recordings.

Although Post Earth lacks any straightforward cohesion between the songs and refuses to follow a particular conceptual line, the musical unity among the band members and their unanimous disbelief in the functions of the world makes for a loudly-pronounced punk manifesto.

The feeling behind Post Earth accords with another manifesto, especially prominent within the 1990s punk feminist movement – that of the riot grrrls. Post Earth is a renascence of the riot grrrl punk movement in a time when women in punk have a more diverse platform to express themselves, but issues such as hate, destruction of the planet, and sexism still need to be addressed.

The genre-bending quartet deploys angry, revolutionary rock sounds along with Leane Geronimo’s strong vocals in “Toolbooth”. FEELS declares: “The world needs you”. In the same fashion “Deconstructed” is a true punk rock statement, where the groovy interplay between the drums and guitars resembles the eminent riot grrrl band Bikini Kill. The album tends to juggle various genres, and the inclusion of the electronic noise songs “Anyways” and “Sour” makes a very interesting addition. However, the melodic “Awful Need” sets a calmer, more introspective tone.

Post-Earth is an illustration of FEELS’ musical talent and a revolutionary call imbedded with hope.

Eleonora (a.k.a. Ellie) is a freelance music writer. Her work is dedicated to exploring the intersections between sound and culture. At the moment she is embracing the digital nomad lifestyle, while travelling the world and documenting the music and cultures she encounters.
RELATED ARTICLES
album reviewalbum reviewsfeels
8.0