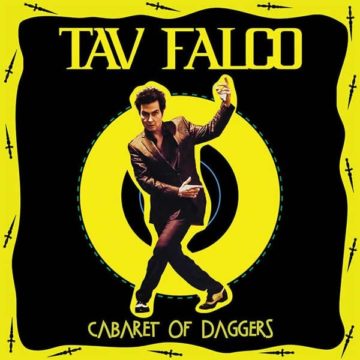 The seventy-three-year-old Tav Falco, who is best known for Tav Falco’s Panther Burns (a Memphis rock ’n’ roll band formed in the late ‘70s), graciously gives us his most recent solo album, Cabaret of Daggers.

Over the album’s twelve tracks (eight of which are covers of classics), Falco delivers a diverse, but confusing and unfocused mixture. His musical styles vary widely to include spoken word, rock, blues, tango, rockabilly, and spaghetti western influences.

The first track, Falco’s “Nobody’s Baby”, is an underperforming, brooding call to love that sounds like an attempt to imitate Leonard Cohen. From there, the album proceed with covers until the fifth song, “New World Order Blues”, a languishing rebellion in which Falco attempts political commentary but remains in the shadow of Neil Young’s “Keep on Rockin’ in the Free World”. The song’s low point comes when Falco, in a spoken word portion, spouts his political views, which are not necessarily off the mark, but rather misplaced.

The highlight of Cabaret of Daggers is the sixth track, a cover of Santo and Johnny’s 1959 instrumental “Sleep Walk”. This is a mesmerizing classic that remains unmatched in its haunting beauty. No cover will ever match the original, but Falco’s version is quite lovely.

The twelfth and final song, “Master of Chaos Theme”, is an instrumental version of a track from Falco’s 2015 album Command Performance. Euphonious, atmospheric, and brooding, the slow guitar, which could be featured in a Tarantino movie or Spaghetti Western, is a fitting conclusion to a fifty-one minute journey through Falco’s mind.

Full respect to Falco, but ultimately, his vocals do not properly compliment the ear-pleasing instrumentalism on this perplexing album.

John Graham is a Vancouver-area resident who typically spends most days admiring music of all genres. When not listening to music, John is usually at a live show, somewhere in the bowels of Vancouver.
RELATED ARTICLES
album reviewalbum reviewscabaret of daggers
9.0