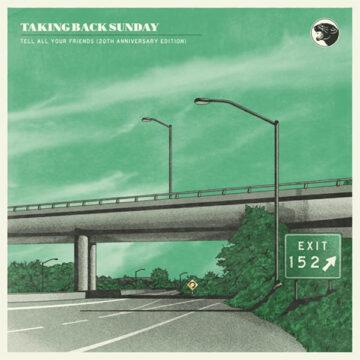 When looking back at the early wave of 2000’s bands that helped shape the emo, pop-punk, and post-hardcore scene, no band is more fondly or memorably mentioned than Long Island natives, Taking Back Sunday. With a heartfelt lyricism that spoke volumes to their clever and self-aware presence felt throughout, Taking Back Sunday takes us back to their gripping and iconic debut release on vinyl, Tell All Your Friends.

The deluxe, 2-LP vinyl set is housed in a gatefold jacket, offering the remastered original album plus a bonus etched 10-inch disc with the four demos. Various limited edition color pressings will also be available, each offering a unique color for LP1, with the standard black 10-inch. Fans can pick these up via the band’s website and on tour (Blue Smoke and Forest Green vinyl), Craft Recordings (Fog vinyl), Revolver (Orange Crush vinyl), and Urban Outfitters (Sangria vinyl).

The crisp-sounding vinyl release takes us back through a moving and nostalgic journey of heartbreak, jealousy, and depression, all centered around a backdrop of an unforgettable radius of highway that perfectly depicts a record of emotional intensity.

From the beginning, the power of these lyrics suck you in, starting with “You Know How I Do.” Poetic and classically tortured as only Taking Back Sunday can bring, along with instrumental energy that beautifully clashes into each other like the breaks of tides on the beach, it perfectly sets the tone for everything that is to come for the rest of this masterpiece.

Another brilliant pop-punk-infused moment that many fans will recall is, “Cute Without The ‘E’ (Cut From The Team), which perfectly captures the spirit of youthful, charged cynicism, without being overly cliche in its approach. Sounding better than ever on this release, it remains the best-known energetic track that propels the album forward for more favorites on the record.

Other songs like “There’s No ‘I’ In Team,” keep the momentum going with its infectious melodic ascending and descending guitar riffs throughout the track that make way for one of the best listening experiences on Tell All Your Friends, “Great Romances Of The 20th Century.” A song dripping with unique classical charisma intermingling afternotes of emotional teenage romance struggles, Taking Back Sunday hits us with another timeless classic of being in love and afraid to make personal connections.

While the beautifully done vinyl is a treasure to hold by itself, Taking Back Sunday gives something extra to the fans who have appreciated this classic trip down memory lane. Four previously unreleased demos of “Mutual Head Club,” “Bike Scene,” “The Blue Channel,” and “Great Romances Of The 20th Century” are put onto the vinyl, sure to make any hardcore fan more than happy with this vinyl release.

Taking Back Sunday’s Tell All Your Friends was a notable achievement and scene gem of its era that continues to tug on the heartstrings of anyone that has experienced pure, youthful, unfiltered romance and all the messy hang-ups that come with it. While this record is no stranger to being one of the best in the genre that keeps bringing new fans in and why the old fans have stuck around, this vinyl re-release has proven that some jewels in the music scene will always continue to shine no matter how old they get.