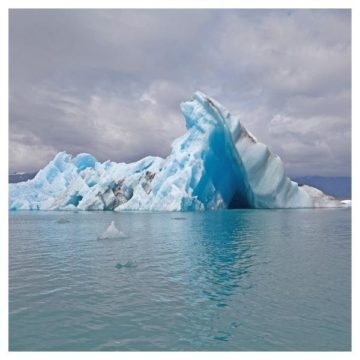 Surfer Blood’s fourth studio album Snowdonia is out via Joyful Noise Records. Ironically, this is a band whose name just makes all too much sense. They are quintessentially Surf Rock and their career has had an undertone of “blood”, with John Paul Pitt’s arrest for domestic battery and last year’s tragic and untimely death of guitarist Thomas Fekete. The album was written shortly after their first long tour without Fekete. Snowdonia faces these darker and heavier themes head on. The band addresses mortality and aging but maintains an upbeat, catchy, pop forward, post-punk sound.

Album opener, ”Matter of Time”, is a straightforward pop focused song. The band idealizes growing up and explores thoughts of falling in love and when to get married. One of the more laid-back, almost shoegaze, tunes on the album is ”Carrier Pigeon”. Pitts wrote the song about his mother’s breast cancer diagnosis and made it an autobiographical piece.

The dark whirlwind of “Six Flags in F or G” has a heavy, driving start that opens up to a rigid guitar solo and big vocal harmonies.

Pitts wrote lots of vocal layering into this album in hopes of showcasing the new Surfer Blood members, Lindsey Mills and Michael McCleary. The songs attempt some interesting call-and-response parts between male and female vocals, and appear longer than previous Surfer Blood rip-it-and-grip-it style. However, they don’t make much of a statement that sets them apart from their past. In the beginning, this band had an intense presence, a shock factor that could suck new fans in. Rather that striving for something new, bold or astonishing, Snowdonia seems to settle for mediocrity. Where there seemed to be an opportunity to move forward musically, Pitts and the new gang seem to stay put. Maybe it’s a way of accepting who they are and deciding that’s where they want to be, but fans may have been hoping for a new light to shine through the hardships and vulnerability.

After majoring in business & entrepreneurship at UCSB and traveling the world, Andrew moved to Los Angeles to pursue music and not give up his love for surfing, hiking and yoga. He is also in a couple really cool, up and coming, indie-rock bands in LA - Mothlight & Lone Kodiak.
RELATED ARTICLES
album reviewsjoyful noisejoyful noise recordings
9.0