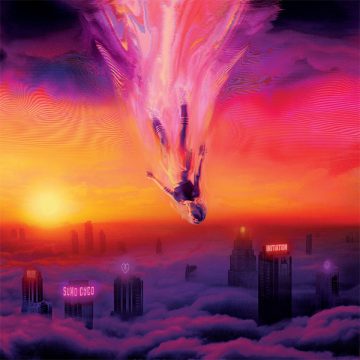 Canadian alternative-metal cult favourites Sumo Cyco have returned with not only their third album, but also, their label debut. Initiation follows 2017’s Opus Mar and builds on the distinctive sound of the band’s unique dancehall and pop-infused metal to deliver a very strong album, front to back.

Initiation opens with the blistering “Love You Wrong”. Driven by a rhythmic verse and a heavy chorus, Skye Sweetnam’s sickly sweet vocals accent the song into unique territory. Furthermore, the contrast between her clean melodies and the throat wrenching, screaming backup vocals is striking. To top it all off, the song has a strong pre-chorus and a lengthy bridge that features a number of moving sections within itself. While this is very much in tone with Opus Mar, Sumo Cyco’s synthesis between metal and pop has never felt so intertwined. This is especially apparent on the following track, the lead single, “Bystander” which sounds as if Gwen Stefani fronted System Of A Down. It seems impossible to separate the pop from the metal; a combination that, when performed at this level, makes for some strong songwriting.

The album continues with “Vertigo”, the most recent single from the band. The track doubles down on the catchiness and further shines a light to the creative songwriting behind Sumo Cyco. Beyond the singles, Initiation continues to soar, largely in part from the musical ability from each member of the band. Furthermore, Sumo Cyco must be commended for their ability to effortlessly and seamlessly blur the lines between seemingly contrasting genres. The drum and bass meet metal fusion on “Bad News” and the hard-rocking dance hall of “M.I.A” are among the most obvious examples. Few artists have bridged the gap between predominantly electronic styles with metal to such a level since Rage Against The Machine. With the blistering pace of “Cyclone”, to the absolute anthems, “No Surrender” and “Run With The Giants”, Initiation proves its worth as a metal record that simply refuses to be held down by typical boundaries.

With Initiation, Sumo Cyco prove their salt as metal’s most unique band in the game. At its worst, they’re just good, but at their best, Sumo Cyco is redefining what metal can look like for the coming decade. Initiation takes the band beyond their previous two records with a dozen tracks that are equally catchy as they are hard hitting. All in all, this is an album that you’ll keep on repeat and will be sure to be among the best of the year. Most importantly, Initiation demonstrates that there truly is no other band quite like Sumo Cyco.

A passion for music has always been a part of Gerrod’s life. As a young boy, he was raised on a steady diet of the music from The Chili Peppers, Aerosmith, The Stones, Prince, and others from his mum. Raised in the GTA, Gerrod continued to foster his love for music by attending a wide range of concerts and learning the drums. His unapologetic passion for music has no bounds and has spread to a wide variety of styles, whether it be the 90’s rock that sound tracked his teenage years, the jazz he studied in university, or his newfound love for hip-hop. He recently received his bachelors in music and education from York University and is passionate about writing and reviewing good (and less than good) music. Gerrod is also the drummer and songwriter for a Toronto based rock & roll band, One In The Chamber.
RELATED ARTICLES
album reviewalbum reviewsinitiation
8.0