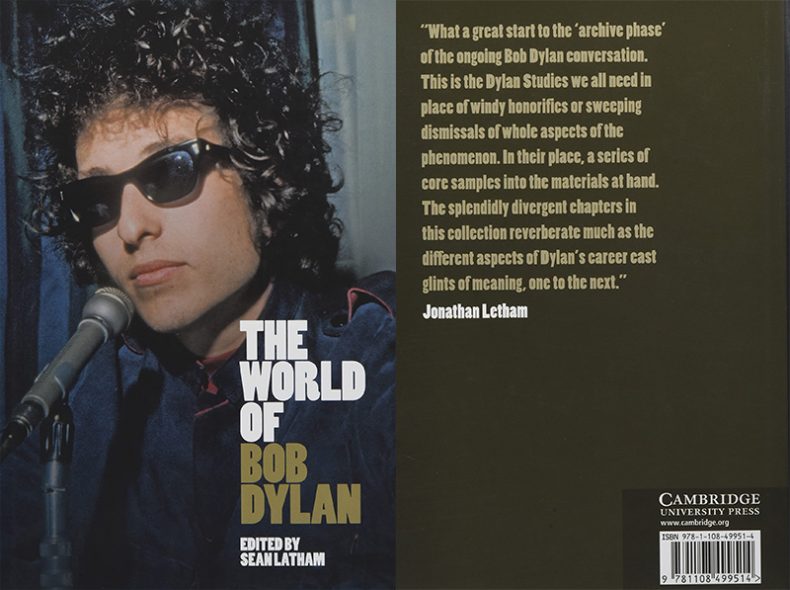 Everyone has their favourite Bob Dylan. The enigmatic singer-songwriter has captured the world’s attention for nearly 60 years as an essential figure among the ever-shifting face of pop culture. Love him or not, nobody would argue against the impact and timelessness of Dylan. Being among the most important artists of the latter half of the twentieth century, Sean Latham has compiled a collection of academic essays in a manner to educate and introduce the legacy of Dylan from a historical perspective. As a result, The World Of Bob Dylan is an incredible source that attempts to make sense of the changing tones, themes, and styles of Dylan’s music and persona in the public eye.

The World Of Bob Dylan is organized into chapters written by different authors to provide a greater sense of perspective to the art of Dylan. The use of various contributor further speaks to Dylan’s universal importance. Each chapter seeks, to varying degrees, to explain how Dylan’s music fits into different genres – from folk to the blues, rock, and the American Songbook – and how he’s interwoven his legacy into various cultural contexts – from religion to gender and sexuality, and politics to The Beat Generation. Speaking on the importance of Dylan, Latham states, “Dylan is going to transition from this living star to a historical item. Not very many people make that transition – lots of people write novels, poems and plays but not many people go on to be taught as a representative of the period. It seems to me that Dylan, when we talk about pop music and literature from the latter half of the twentieth century, will be one of those icons. Dylan will be the one taught about in classrooms.” With this in mind, The University of Tulsa made Latham the course director on their new class studying the work of Dylan. Latham continues, “About eighty years after Joyce was born, the James Joyce Quarterly was created, about eighty years after film was created, film departments started to appear – we are at this amazing moment where this wealth of mid-century America is being taken seriously… We can look at that history in broader strokes and determine who’s arcs truly shaped the time.” Subsequently, The World Of Bob Dylan seeks to emphasise the importance of Dylan’s creative output in different musical, political, and cultural contexts in an introductory fashion. Latham best captures Dylan’s importance with this sentiment, “It’s like a Shakespearean play in a sense, each generation gets to reinvent a Dylan song or lyric in their own way, and that’s an amazing thing… It sounds grandiose but comparisons to Homer and Shakespeare are apt here. Dylan has created this cast of characters and stories that are deeply American and he’s made them almost mythical. It’s not just covering a Dylan song, when you write a breakup lyric that feels overly poetic, you’re borrowing from what Dylan did.”

Such an organizational system allows for the many contributors of The World Of Bob Dylan to create a multifaceted deep dive into the many faces, identities, and eras of Dylan. “I think Bob Dylan himself, as we think we know him, is a character that, like all of us, is ever changing through life” Latham tells me. This in itself is at the centre of The World Of Bob Dylan. The book and its authors do an excellent job at analysing the significance of Dylan in music and culture without attempting to actually create any new labels that further mythologize the enigmatic icon. Rather, the book is a critical examination that simply seeks to make sense of Dylan through an academic lens. The World Of Bob Dylan feels like a crucial introduction to the artist that anyone – lifelong fans and post-secondary students alike – would benefit from reading. Far from a biography, Latham and his team have written a book that puts the Nobel laureate under the same analytical spotlight as history’s greatest novelists, poets, and playwrights; ultimately furthering Dylan’s legacy as one of the greatest artistic figures of the last century.

The World Of Bob Dylan kicks off an archival deep dive into the legacy and cultural importance of Dylan in thoroughly academic manner that remains enjoyable. This book pairs well with Dylan’s expansive discography and will more than likely lead to a greater appreciation for the singer-songwriter. The book itself is an extension of Bob Dylan Archives – housed at the University of Tulsa’s Helmerich Center for American Research – in that it provides a scholarly and researched approach to understanding Dylan. As Latham explains, “it grew primarily out of the archive itself… The most important thing about the course we offer at the university on Dylan is the same thing as this book: it’s a big look at the state of the file when it comes to Dylan – what kinds of things do people have to say about him and what can we say about him with this archive that we couldn’t say before.” The Bob Dylan Archive includes over 6000 items including memorabilia, film, recordings, and original lyric sheets. With such a wealth at The University of Tulsa’s disposal, it seems that The World Of Bob Dylan is a much needed scratch on the surface of what is to come.

Purchase The World Of Bob Dylan HERE Or Via

A passion for music has always been a part of Gerrod’s life. As a young boy, he was raised on a steady diet of the music from The Chili Peppers, Aerosmith, The Stones, Prince, and others from his mum. Raised in the GTA, Gerrod continued to foster his love for music by attending a wide range of concerts and learning the drums. His unapologetic passion for music has no bounds and has spread to a wide variety of styles, whether it be the 90’s rock that sound tracked his teenage years, the jazz he studied in university, or his newfound love for hip-hop. He recently received his bachelors in music and education from York University and is passionate about writing and reviewing good (and less than good) music. Gerrod is also the drummer and songwriter for a Toronto based rock & roll band, One In The Chamber.
RELATED ARTICLES
bob dylanbooks
7.0