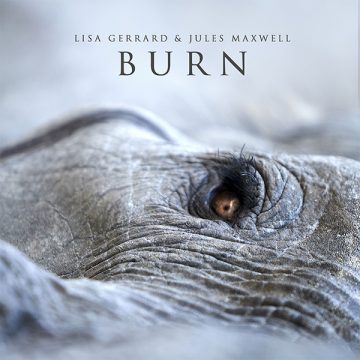 Dead Can Dance members Lisa Gerrard and Jules Maxwell have teamed up with producer James Chapman (MAPS) for a new album to be released this spring. Burn is a new project with London-based label Atlantic Curve and is a long-form album of seven unique tracks inspired by natural elements of fire, wind, and sea, and of the wisdom of animals and their relation with humans.

Vocalist Lisa Gerrard sings in a way that is uniquely her own – her lyrics aren’t in English, they are comprised of vocalizations, a language that she has developed on her own. Like enjoying music in any foreign tongue, the purpose is to feel through the vocalizations as if they were another instrument rather than attempting to find meaning in the words.

The tracks on Burn serve to take the listener on a journey. They are uplifting and mysterious, and just like the inspiration for the album; they feel like exploring new lands.

“Deshta (Forever)” is a track that is woven with magic, like a flight across the desert it soars with a sense of mysticism and ancient knowledge. “Aldavyeem (A Time to Dance)” is just that, a joyous celebration that lifts the heart and spirit. You can’t help but want to move.

“Orion (The Weary Huntsman)” is a definite turn in mood and tone. As the title suggests, this song is ascension into the great unknown, past the clouds and into the stars and beyond.

Burn is a classic album featuring Gerrard doing what she does best – crafting transformative vocals that are haunting and mesmerizing. Paired with Maxwell who has crafted a substantial career composing music for dance, theatre and film, he has created vast auditory worlds that are easy to get lost in. If you’re a fan of Dead Can Dance or any of Gerrard or Maxwell’s vast array of cinematic works, this album is a welcome addition.

Samantha is both a writer and a fan of the arts and has been able to find numerous ways to pair the two. Eager to dive head first into writing for Spill, Samantha is an avid partaker and reviewer of live art in Toronto serving as an editor at Mooney on Theatre exploring live local theatre, she's a photojournalist for Go Globehopper, a travel, dining and tourism blog that focuses on Toronto and abroad and previously for Lithium Magazine. She's passionate about music, theatre, photography, and writing -- not necessarily in that order. She drinks tea more than coffee, prefers ciders over beers, and sings karaoke way too loudly. You can follow her on various social media including Facebook, Twitter, and Instagram.
RELATED ARTICLES
album reviewalbum reviewsatlantic curve
7.0