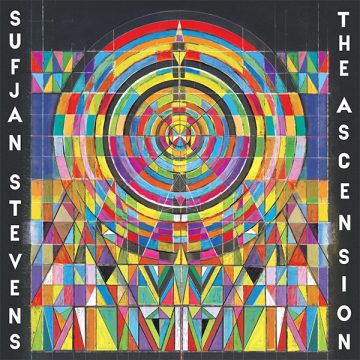 It is hard to believe, but it has been five years since Sufjan Stevens released a ‘conventional’ studio album. That doesn’t mean he has not been busy, because he has.  The Ascension is a return to form for Stevens. It is a complex album that takes the listener on a journey into Stevens’ world.

A number of singles have been released prior to the release of The Ascension, and as good as they are, they don’t do a great job representing the album. “America”, “Video Game”, and “Sugar” work much better within the context of the rest of the tracklist. Take “Video Game’ for example. It is an amazing song with a tip of the hat to old electro music, but it is a cornerstone here, his manifesto if you will. “I don’t care if everyone is into it/I don’t care if it has a popular refrain”, sings Stevens. He will not compromise its art for an instant hit. He is clearly not craving the billion streams but rather, as he has consistently done over the years, uses music as an expression, and treats it as an art form.

This is an album of twists and turns. He uses sound, rhythm, loops, and his vocals unlike anyone else, in such a way as to create a slight air of discomfort, using sound to create a cohesive record. That does not mean that the songs sound the same. “Video Game” and “Lamentations” sit side by side, but could not be more different. He then slows the proceedings down with the almost ambient “Die Happy”. It is incredible song sequencing which creates incredible flow throughout. The album ends with the epic “America”. Lyrically, it is one of the most wonderful songs Stevens’ has written, making an incredibly strong political statement, the perfect ending to the album.

The Ascension demonstrates a great deal of growth, expansion, and experimentation in Sufjan Stevens’ work.  Not only is it one of his best album–if not his best–it is clearly a contender for Album Of The Year.