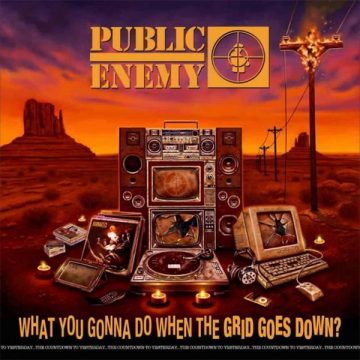 Public Enemy
What You Gonna Do When The Grid Goes Down?
Def Jam Recordings

Despite kind-of-firing-kind-of-not-firing Flavor Flav in March of this year, east coast hip hop pioneers Public Enemy are back; perhaps better than they have been in the past two decades, with their latest album, What You Gonna Do When The Grid Goes Down. Following their 2017 release, Nothing Is Quick In The Desert, they reunited Chuck D and Flavor Flav, backed by DJ Lord, have teamed up with an all-star cast of hip hop royalty, including Cypress Hill, Mike D & Ad Rock (Beastie Boys), Nas, Black Thought & Questlove (The Roots), Ice-T, and George Clinton, among many others, to deliver one of their strongest records since the ‘90s.

Opening with the haunting spoken word of Clinton on “When The Gird Go Down”, Public Enemy set the tone when they come alive on “GRID”, a technological dystopia track inspired by current events and 1984. A busy mix reminiscent of The Bomb Squad, paired with a catchy, chorus, a slick verse from Cypress Hill’s B-Real, and some funky guitars set the tone perfectly: Public Enemy are back and they’re relentless. This is only furthered with the lead single, “State Of The Union (STFU)”. The fiery political track, featuring DJ Premier, is aimed at Trump and is the anti-establishment anthem 2020 needed. The track barely stops short of shooting Trump down in the middle of Fifth Avenue – just barely.

The second single, a rerecorded version of their 1989 hit “Fight The Power”, raises the bar even higher. Featuring Nas, Rapsody, Black Thought, YG, Jahi, and Questlove, “Fight The Power: Remix 2020” proves the timelessness, social relevance, and raw power of Public Enemy over 30 years later. The remix is slick and driven by a dirty groove, and delivers a refreshing take on a hip hop classic. Of the 16 tracks on What You Gonna Do When The Grid Goes Down, Public Enemy truly shines without a single weak song. Highlights include the complete ‘80s throwback, “Public Enemy Number Won” (featuring Mike D, Ad Rock, and Run-DMC), the hard-hitting “Smash The Crowd” (featuring Ice-T and PMD), the unstoppable “Go At It” (featuring Jahi), and the handful of tracks without featured artists: “Toxic”, “Beat Them All”, and “R.I.P. Blackat”.

A passion for music has always been a part of Gerrod’s life. As a young boy, he was raised on a steady diet of the music from The Chili Peppers, Aerosmith, The Stones, Prince, and others from his mum. Raised in the GTA, Gerrod continued to foster his love for music by attending a wide range of concerts and learning the drums. His unapologetic passion for music has no bounds and has spread to a wide variety of styles, whether it be the 90’s rock that sound tracked his teenage years, the jazz he studied in university, or his newfound love for hip-hop. He recently received his bachelors in music and education from York University and is passionate about writing and reviewing good (and less than good) music. Gerrod is also the drummer and songwriter for a Toronto based rock & roll band, One In The Chamber.
RELATED ARTICLES
album reviewalbum reviewsdj premier
8.0