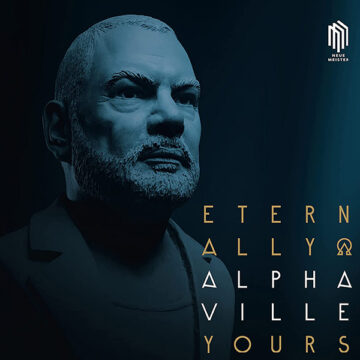 Eternally Yours is Alphaville’s first studio album since 2017’s underrated Strange Attractor. The band formed in 1982 and  has been making excellent albums since 1984 and have produced a diverse catalogue of music. For Eternally Yours Marian Gold (the only original member of the band) and company have taken a different path. For this album, they have decided to revisit their history but with a slight twist. Eternally Yours finds the band working with German Film Orchestra Babelsberg to reinterpret their classic hits and album cuts as a symphony. Unlike other symphony projects, the band was involved with the whole process and Gold is providing all new vocals. The whole project works.

The old synthesisers are replaced by an orchestra and the songs sound new and timeless. A song such as  “Sounds Like A Melody” takes on a whole new life, and the same can be said for the majority of the songs. It is also refreshing to see Gold dip into the album history and perform songs that were neither singles  nor hits. For example, “Around The Universe” from Strange Attractor and “Moon Girl” from the extremely limited box set CrzayShow (2003). Both of these examples are of strong songs that may have escaped the casual fan. And, once again, the song has been completely restructured. And in doing so, this creates almost a new song entirely.

A great deal of credit belongs to Max Knoth and Christian Lohr who have arranged the songs into these new forms. Given that these songs were synthesiser based, it could not have been an easy task, but Alphaville has always written strong melodies and did not base its career solely on programmed music. Throughout their career Alphaville was blending genres and creating their own sound. The fact that Knoth and Lohr were able to arrange the songs so the album has a strong consistent flow and feel is quite remarkable.

And that is the beauty of the album. It does not sound like a compilation album, but rather a coherent album, almost a concept album. Beginning with “Dream Machine” (another obscure song  originally from the limited edition box set Dreamscape, released in 1989), the songs take the listener through an internal search of oneself and their place in the universe. It ends with a majestic arrangement of “Forever Young”, which is simply divine. Gold’s voice carries with it a sense of melancholy and sadness that is stronger in this version. The same can be said with the wonderful version “Dance With Me”, which brings out the sadness and despair of the song. Gold has never sounded better.

Eternally Yours is a fantastic double CD/three album set. There are also bonus tracks of different versions of “Forever Young”and single edits of other songs. While not essential, they are nice to have in the set, as is the original version of “Dream Machine”, which many have not heard as it is difficult to find. Overall, this is a brilliant set. These versions of the songs will not replace the original versions, but they are wonderful new and bold arrangements of extremely well-crafted songs.

Born and raised in Whitby, Aaron discovered music through his love of The Beatles. This led to a career in radio, writing for various publications, and ultimately a radio show about The Beatles (Beatles Universe), which ran for over four years. When not immersed in music, Aaron enjoys spending time with the loves of his life -- his wife Andrea, and daughters Emily and Linda (all of whom have an intense love of music too).
RELATED ARTICLES
album reviewalbum reviewsalphaville
8.0