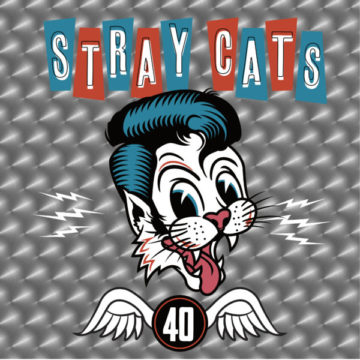 Forty years ago Brian Setzer, Slim Jim Phantom and Lee Rocker formed a trio in hopes to capture the vintage vibes of rockabilly god Eddie Cochran. Struggling to find success in their native America, they took up residence in England and quickly found themselves being courted by Virgin, Stiff and Arista Records. They would eventually sign with the latter and released their self-titled debut in early 1981.

Fast forward to the summer of 1982 and they had become MTV sensations; bringing the rockabilly revival, started by The Cramps and Robert Gordon, to the mainstream. With their American debut LP, Built for Speed, the Stray Cats had two top-ten singles with “Stray Cat Strut” and “Rock This Town”.

Their success would not last long though, and the band disintegrated two years later. The Stray Cats would reform in 1986 and stay together for another six years, and then reunite in 2004 only to disband again five years later. Unfortunately the output during these periods was sparse and somewhat trite.

Now after two and half decades without a studio release, the Stray Cats return with a proper studio album. What the album cover and title lack, the music certainly makes up for.

Tracks like “Cry Danger”, “Mean Pickin’ Mama” and “Rock It Off” are instant classics the Stray Cats can add to their iconic discography. Setzer’s Gretsch is punchy and raw, Slim Jim’s two-piece kit is as beautifully primitive as ever while Lee Rocker keeps the madness in check with his sturdy double bass lines.

With the slippery surf rock atmosphere on “I Attract Trouble” and “Desperado” the Stray Cats do bring a fresh element to their music, while still managing to stay in their comfort zone.

40 is quite possibly their best recording since Built for Speed. Just keep in the mind that the Stray Cats aren’t here to break new ground. They found their formula a long time ago and they are sticking to it. Sure, we’ve heard these licks time and time before but if this music doesn’t want to make you slick your hair back, throw on a biker jacket and start a rumble, I don’t know what will.

As a child growing up in the suburbs, Ryan found music as a way to soothe his boredom. After first hearing AC/DC at the age of 10, he was hooked on music. Tracing its roots to the ‘50s, he became obsessed with Elvis, Buddy Holly and Chuck Berry. Somehow that led to grunge, then psych-rock, then jazz, etc. The list goes on and on and his collection of vinyl records continues to grow.
RELATED ARTICLES
album reviewalbum reviews
7.0