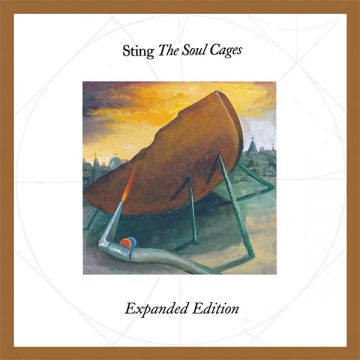 Thirty years ago, Sting released his third solo album, The Soul Cages. Written largely in response to the passing of his father, it was a critical favourite that would net Sting his first Grammy the following year, and was the first to feature guitarist Dominic Miller – who performed on every Sting record between 1991 and 2016. In many ways, The Soul Cages was a prolific album for Sting. With that in mind, the 30th anniversary edition, The Soul Cages (Expanded Edition,) features an additional 13 tracks that range from unreleased songs, live cuts, and a number – too many — of remixes and edited versions.

From the get-go of the seafaring accordion of “Island Of Souls”, The Soul Cages (Expanded Edition) remains among Sting’s most ambitious and introspective collections of music from a songwriting perspective. This is only furthered by the incredible nature of “Mad About You”, and the funky shuffle underscoring Middle Eastern melodies on “Jeremiah Blues (Part 1)”. In all regards, Sting and his all-star band are as tight a unit as they come as they blast through the contemporary and conceptual harmonic, melodic, and rhythmic passages with an effortless sense of groove that feels almost casual. Among those listed, “The Wild Wild Sea” and “The Soul Cages” also remain definite highlights. All round, The Soul Cages is a fantastic album driven by Sting’s lush vocals and his beyond strong songwriting, marking this era as a certain peak in within his solo career.

The expanded portion of the reissue opens with a jazzy, piano led instrumental, “I Miss You Kate”, a truly exciting treat that further emphasises the versatility and sophistication of Sting’s songwriting capabilities. In a surprising turn, this is then followed by a cover of Elton John’s “Come Down In Time” where Sting flexes his moody and slightly raspy baritone vocals. Two live tracks, “Tempted” and “Ne Me Quitte Pas”, are up next and both act as additional highlights of the whole record. The last portion of the reissue of particular interest is a rough demo with an alternative ‘90s flare to it, “Oo La La Hugh” – named after the repeating scat vocal line – would have made for a very welcomed addition to the album should it have ever made it past this very early form. The remaining eight tracks on The Soul Cages (Expanded Edition) consist of alternative mixes, Italian and Spanish versions, and edited versions of tracks from the original album. It is here where the reissue loses all momentum and interest. Rather than fill the reissue with demos or live tracks from the era, a majority of The Soul Cages (Expanded Edition) are simply different versions of the same songs you’ve already heard, giving the record a feeling of excess that it does not manage to justify.

Despite the original success that The Soul Cages received as a contemporary creative powerhouse, The Soul Cages (Expanded Edition) feels bloated and unnecessary. Do we really need an additional two cuts of “Why Should I Cry For you?”, let alone an extra four mixes of “Mad About You”? The Soul Cages (Expanded Edition), while serving as a reminder of Sting’s 1991 triumph, would have made for a far more compelling EP consisting of the bonus live cuts along with “I Miss You Kate”, “Come Down In Time”, and “Oo La La Hugh”. This would have celebrated the anniversary in a far more exciting manner whereas in reality, the album feels almost as if Sting is forcing an excessive quantity onto us for the mere reason of justifying an anniversary edition in the first place. Unless you’re an absolute Sting geek – to the point of never placing blame on him for breaking up The Police – then you’re better off casually streaming through The Soul Cages (Expanded Edition) to find the occasional pieces of gold within the thick of it.

A passion for music has always been a part of Gerrod’s life. As a young boy, he was raised on a steady diet of the music from The Chili Peppers, Aerosmith, The Stones, Prince, and others from his mum. Raised in the GTA, Gerrod continued to foster his love for music by attending a wide range of concerts and learning the drums. His unapologetic passion for music has no bounds and has spread to a wide variety of styles, whether it be the 90’s rock that sound tracked his teenage years, the jazz he studied in university, or his newfound love for hip-hop. He recently received his bachelors in music and education from York University and is passionate about writing and reviewing good (and less than good) music. Gerrod is also the drummer and songwriter for a Toronto based rock & roll band, One In The Chamber.
RELATED ARTICLES
album reviewalbum reviewssting
8.0