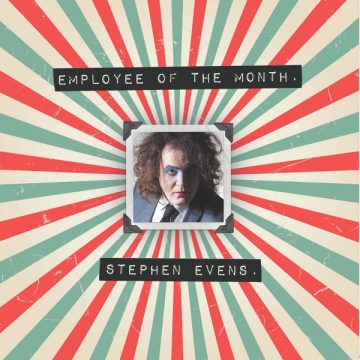 London, U.K.’s Stephen EvEns has been performing for a number of years, and Employee Of The Month is his sophomore album. Also known as Stephen Gilchrist, he is a drummer of some renown. He has been a member of Graham Coxon’s touring band, and has provided his steady beat to The Lightning Seeds, The Godfathers, The Damned, and The Cardiacs, and that is really a very small sampling of his impressive resume.

Now, he is ready to step into the spotlight again and present an incredibly original album of 10 songs, all of which he wrote except one. His debut album, 2017’s Bonjour Poulet, was much more of an independent album with little help from others. Here he is joined by other musicians to create a very strong album.  Although the album has a very consistent flow and feel, the beauty of it is that the songs are very diverse and stand on their own.

The album opens with “Dustbin Man”, and off we go into the lives of some very interesting people. Employee Of The Month plays out like a novel. EvEns introduces characters and tells their story, they all exist in his own world of his own creation, and for the most part they all get along–until the last song, that is,  with “The Day I Burned My House Down”.

EvEns weaves remarkably melodic tunes throughout and draws the listener in with instantly accessible tunes, but don’t be fooled, there is a lot going on in this album. To put it simply, you are not going to get this entire album in one listening. His drumming technique is perfect, but to be honest, this is not a Carl Palmer album full of extended solos, but rather EvEns is merely a member of a band. His vocals are a beautiful mix of force and vulnerability. It is quite stunning.

This album shows EvEns as more than a drummer. The highlight of the album is the beautiful “George And Kathleen”, which is the only song on the album he did not write. It features EvEns’ viola, which is stunning, and adds a great deal to the song, as does Caroline Gilchrist who duets. This song is sublime. And to be clear, he plays many instruments on the album.

Overall, this album is fantastic, one that EvEns should be proud of. Employee Of The Month is an ambitious album that succeeds on multiple levels. Although you may not be the employee of the month, listen to this album to find out who is, and for my money, Stephen EvEns comes to mind.

Born and raised in Whitby, Aaron discovered music through his love of The Beatles. This led to a career in radio, writing for various publications, and ultimately a radio show about The Beatles (Beatles Universe), which ran for over four years. When not immersed in music, Aaron enjoys spending time with the loves of his life -- his wife Andrea, and daughters Emily and Linda (all of whom have an intense love of music too).
RELATED ARTICLES
album reviewalbum reviewsdustbin man
8.0