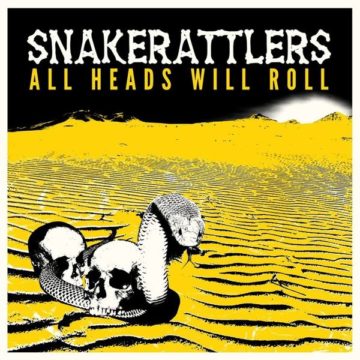 The UK punk duo Snakerattlers have returned with their sophomore album, All Heads Will Roll, following up their 2017 debut, This Is Rattlerock.  Comprised of husband and wife duo Dan Oliver Gott (vocals and guitar) and Naomi Gott (vocals and drums), the band’s style, while firmly planted in the vintage punk soundscapes of Dirty Water Records, feels like it owes as much to The Stooges as to desert rock icons Queens of the Stone Age and Kyuss, along with other duos such as Death From Above.

Opening with the Kill Bill-inspired “Aither’s Theme”,  All Heads Will Roll has a slow beginning which feels quite cinematic. “Aither’s Theme” seamlessly bleeds into the almost sludgy title track. “All Heads Will Roll”, despite being based around a blues structure, is a gritty rocker which feels like the Sex Pistols doing ‘50s surf rock, and features call-and-response vocals that juxtapose Naomi’s soft, warm voice with Dan’s wrenching screams. Songs like “She’s Strange” and the shuffling “I’ll Destroy Your Soul” are more melodic, giving the duo a sense of versatility in tone. That being said, the blistering heaviness of “Rattle Rock Stomp” is truly a highlight among the 11 tracks.

While overall they may sound thinner due to their lack of a bassist and the lo-fi aesthetic, Snakerattlers makes up for it with menacing guitar tones, thrashing drums, and catchy choruses with contrastingly gritty verses. If All Head Will Roll solidifies anything, it is that the punk and rock scenes should keep a close eye on Snakerattlers.