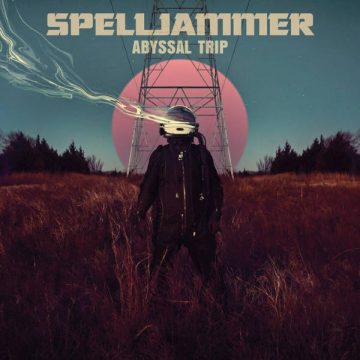 Album titles can vary in quality. Many are iconic, while others are atrocious, and some reach a new level of awesome by encapsulating everything about music itself. Abyssal Trip falls squarely in this third category. It’s the latest record by Swedish heavy metal group Spelljammer, which consists of Niklas Olsson on bass guitar and vocals, Robert Sörling on lead guitar, and Jonatan Rimsbo on drums.

As the title suggests, Abyssal Trip sounds like it was performed at the bottom of the ocean, and it’ll appeal to those who appreciate the darker and more experimental side of heavy metal music. The album opens with “Bellwether,” which has a lengthy, low, and rumbling guitar line. There’s also a siren, distorted vocals, and a strong drum beat that comes in part way through the song. All of these elements work together to establish an ominous tone that sticks around for most of the record. However, the overall style is by no means uniform. For example, album highlight “Among the Holy” is essentially a three-part act that has a steady and suspenseful opening, a hard hitting and swaggering middle, and a sad and mellow outro. The album closes with “Silent Riff,” which is long, intense, and contains a guitar solo that really shreds. The pacing of this album can come across as slow at times because the different elements take a long time to build on each other, especially in the opener and closer. Nonetheless, Abyssal Trip is an exciting and mysterious experience in the murky depths of metal music.

For all of his life, Dylan has loved music and writing, but it wasn’t until 2020 that he decided to give a shot at music journalism, which is the perfect marriage of his two passions. Since then, he has written for Exclaim!, Antidote, and now Spill Magazine. His favourite genres are rock and folk, but he’ll listen to anything. He has a BA in English from Wilfrid Laurier University and a Postgraduate certificate in Public Relations at Sheridan College.
RELATED ARTICLES
album reviewalbum reviewsridingeasy records
8.0