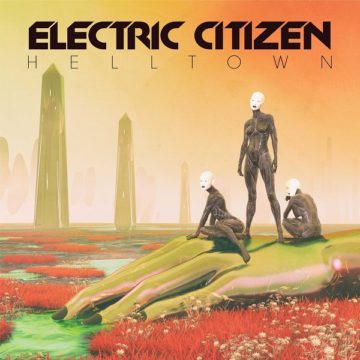 Hailing from Cincinnati, Ohio, Electric Citizen have returned with their third full-length album, Helltown. It was named after their hometown – Northside was commonly referred to as Helltown in the 1800s due to its reputation for rowdy taverns frequented by the neighborhood of factory workers and immigrants. The band delivers a modern take on sludgy stoner rock equally inspired by Black Sabbath as it is by the likes of Kyuss.

Opening with the unrelenting pulse of “Heart Attack”, Electric Citizen make it clear that they’re out for blood. With vocals that rest between Anne Wilson and Ozzy Osbourne, and hard-hitting instrumental tracks with crunching and slink riffs pulled right from the ‘70s, the band takes on classic rockers the likes of “Hide It In The Night” and the blistering “Ripper”, in a fashion that fits seamlessly with that of some of rock’s most esteemed bands.

Helltown continues to shine as Electric Citizen slows things down to indulge in sludgy metal-inspired rock that adds a touch of versatility to the album. “Lunch” and “Mother’s Little Reject” are great examples of this, with the latter feeling slightly experimental as well. That being said, “The Pawn” stands out as not only the strongest track on the record, but also the most different as it is the only song driven by such a shuffle.

While Helltown is a great album from a band that is very well on its way towards much bigger things, Electric Citizen would benefit from expanding their sound to allow for their future albums to feel as adventurous and daring as their previous work. This however does not stop the album from being yet another strong step forward as Electric Citizen takes their unique songwriting voice with a distinct Sabbath flavour forward into their next chapter.

A passion for music has always been a part of Gerrod’s life. As a young boy, he was raised on a steady diet of the music from The Chili Peppers, Aerosmith, The Stones, Prince, and others from his mum. Raised in the GTA, Gerrod continued to foster his love for music by attending a wide range of concerts and learning the drums. His unapologetic passion for music has no bounds and has spread to a wide variety of styles, whether it be the 90’s rock that sound tracked his teenage years, the jazz he studied in university, or his newfound love for hip-hop. He recently received his bachelors in music and education from York University and is passionate about writing and reviewing good (and less than good) music. Gerrod is also the drummer and songwriter for a Toronto based rock & roll band, One In The Chamber.
RELATED ARTICLES
album reviewalbum reviewselectric citizen
7.0