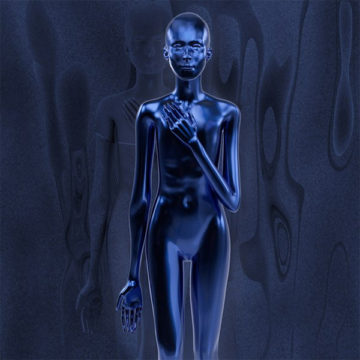 I like organized noise. I really like albums by artists who are not afraid to be a bit noisy and seemingly chaotic. Six Archetypes falls into this category, but let’s be very clear: This music is not chaos. Every note, every sound has been carefully placed to form a soundscape; a sound collage.

Six Archetypes is Soho Rezanejad’s second solo album. She was in Gold Lip and Lust For Youth, and in 2015 she released her first solo album, Idolatry. It was an impressive debut. Over the last three years, Rezanejad has been delving deeper into her sounds, her music and lyrics. As a result, Six Archetypes is a much darker album than her last, less melodic, but more intriguing and a much more interesting album.

Musically, the album is fascinating from beginning to end, and Rezanejad’s vocals are strong throughout. She has many different styles with her voice, and her voice becomes an instrument on the album.

Rezanejad hails from Copenhagen and her music has many diverse influences. I am not sure how her native Denmark impacts her music, but it is clearly her own sound. At times it is almost like “Siouxsie goes industrial.” This is not to say she copies anyone, because she does not, but what is clear is that she has done her homework over the years, absorbed many different artists and turned this information into her own style.

The music is somewhat dark throughout, and she has recorded a thematic album. The archetypes she is singing about are spread throughout the album and in various characters. Orphans, prostitutes, actors (“Actor’s Monologue” is one of the many highlights on this album, and is a song that must be heard), idealists, and seekers are all represented here.

The album ends on an emotionally high note. “Elegie” is sung in Farsi, and is the Iranian national song recognised by The National Council of Resistance of Iran (a faction opposed to the country’s current Islamic republic). It is worth noting that her parents are first-generation Iranian immigrants and it is obvious that song means a great deal to Rezanejad. The song is beautiful. Rezanejad has arranged the song over sparse musical accompaniment, and it works. Her voice is strong and stirring and one does not need to understand the language; the emotion and spirit are captured on digital tape. It is interesting that she opens the album with “Pilot: The Orphan” and ends with a song that represents her roots. Beautifully structured and a beautiful way to bookend the songs on Six Archetypes.

As Rezanejad says at the end of “The Russian,” ‘I’m trying to make sense of it all.’ That sums up the album quite nicely. She just uses her voice and instruments to make sense of her world. Six Archetypes is a brave, bold album.

Born and raised in Whitby, Aaron discovered music through his love of The Beatles. This led to a career in radio, writing for various publications, and ultimately a radio show about The Beatles (Beatles Universe), which ran for over four years. When not immersed in music, Aaron enjoys spending time with the loves of his life -- his wife Andrea, and daughters Emily and Linda (all of whom have an intense love of music too).
RELATED ARTICLES
album reviewslust for youth
8.0