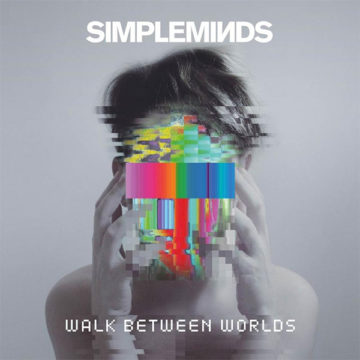 Led by singer Jim Kerr and guitarist Charlie Burchill, ’80s art-rock band Simple Minds has returned with its latest album since 2014’s well-received Big Music, produced by the band along with Andy Wright and Gavin Goldberg.

Simple Minds was one of the standard-bearers for a new kind of rock in the ’80s, when they took the art-rock invention of post-punk and constructed a new musical force by adding rousing choruses along with a dance beat.

Working with the same producers as on Big Music, Walk Between Worlds certainly has some highlights, including the first video and single, titled “Magic,” which is an upbeat reflection on their early years and the faith they had in their own abilities during those formative years.

Other key tracks on the eight-track album (apart from three bonus tracks included on the Super Deluxe Edition) include “Summer” with its shimmering guitars, and the title track “Walk Between Worlds,” which was recorded at the famed Abbey Road Studios in London. Another highlight is “Barrowland Star,” named after the iconic ballroom in the East End of Glasgow, Scotland that has hosted many memorable Simple Minds concerts in the past.

Simple Minds will take to the road in February 20l8 to premiere Walk Between Worlds in a small series of shows which will be in three parts: a performance of the album, a live on-stage interview, and a classic Simple Minds set, which will include the band re-imagining and exploring songs from their extensive catalogue.

Gerry Young is President of Current Records and Management, and author of the 2011 biography Pop Goes The Weasel: Rock And Roll Off The Record, available at Indigo/Chapters, Barnes & Noble, and Amazon.com. He has recorded and managed Juno Award winning bands Martha And The Muffins and The Parachute Club among others.
RELATED ARTICLES
album reviewsbmgmagic
7.0