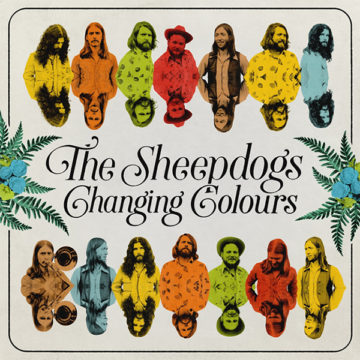 You’d be forgiven if the vision of Canada’s rolling plains, shoulder-high wheat, and farm country didn’t immediately send you to thoughts of southern rock. Canada’s prairies aren’t exactly Alabama or the bayou, but this is exactly where The Sheepdogs hail from, and southern rock is exactly what they do. It’s their bread and butter. Saskatoon’s favourite sons have made a living on albums dripping with Lynyrd Skynyrd, The Allman Brothers Band, and Crosby, Stills & Nash. However, their latest album, Changing Colours, goes further. Beyond the big guitar-driven drawl and Ewan’s velvety tones is a new, wider, more-evolved sound. This album is a smorgasbord of visuality. Embedded deeply in the ’70s, Changing Colours would fit perfectly as a soundtrack to a Quentin Tarantino movie. I almost feel bad digitally streaming this album. Listening to it on anything but vinyl is a crime against music. Seriously, does this record come with a hair pick?

“Nobody” and the first single, “I’ve Got a Hole Where My Heart Should Be,” kick off the disc in typical toe-tapping, jean-jacket, Sheepdogs form. All guitar, all rock continues into “Saturday Night,” making the ‘dogs the latest in a string of bands to sing about fighting on a Saturday night. (Is Saturday night really for fighting? Am I doing something wrong? Mine tend to include hockey, Pringles and Netflix.)

After the first three songs, Changing Colours seems to be another great, typical Sheepdogs album. But that’s where you’d be wrong — about the ‘typical’ part, anyway. By the time the album’s second single, “Let It Roll,” reaches your ears, you are now entrenched in a campfire sing-a-long that wouldn’t feel out of place on the Beatles Sgt. Pepper’s album. “The Big Nowhere” immediately transports you to New York City in the late ’70s — big fur collar on your leather jacket and all — before you fall back into psychedelic swirling patterns, Fritz the Cat, and losing yourself in the organs. “I Ain’t Cool” and its horns quickly snap you back from your acid trip and back to your VW van with your friends. But if you’re afraid this record isn’t going to rock enough, I direct you to track seven, and future crowd favourite “You Got to Be a Man.” You can’t help but imagine this song being played live, fans jumping and beach balls abounding. “I’m Just Waiting for My Time” is a deeply-brooding, haunting song. It’s a slow burn; acoustic and building. It plays as an ode to Leonard Cohen. It might not only be the best song on the album, but one of the best Sheepdog songs to date. “Up in Canada” is a country-esque nod to the band’s homeland. Windows down, cruising along the Trans-Canada Highway. The song is an escape as trees, prairies, and carved-out mountains pass you by. You can’t help but smile. It all ends on a strong, Pet Sounds-like track with “Run Baby Run.”

The Sheepdogs are pros at making consistent albums through and through, showcasing their wide range of talents in the mix of Canada’s premier songwriters. This one is no different. I don’t want to say their music sounds like you’ve heard it before, because you haven’t. Their albums just feel like home. Clocking in at 17 tracks, included are a few short instrumental ditties aimed at showing off, because they’re The Sheepdogs — and you’re not.

Changing Colours drops February 2. Run, don’t walk, to your local record shop to pick up a vinyl copy. Buy a record player if you have to. Seriously, your ears will thank you. If you must listen to it digitally, iTunes has you covered for $10.

If you haven’t checked out The Sheepdogs live, shame on you! They hit the road in support of their new masterpiece starting in February. They’re crossing Canada in the dead of winter to bring some much-needed rock ’n’ roll. Show ‘em some love.

Here's what we think...
Spill Rating
Fan Rating
Rate Here
New Criteria
10
8.1
8.0
Total Spill Rating
8.1
Total Fan Rating
14 ratings
You have rated this
Album Reviews
album reviewschanging coloursi'm just waiting for my timei've got a hole where my heart should belet it rollnobodythe sheepdogswarner music
album reviews, changing colours, i'm just waiting for my time, i've got a hole where my heart should be, let it roll, nobody, the sheepdogs, warner music
About the Author
Drew Nihill

Drew is a Hamilton, Ontario based photographer who likes to think he can string two words together. His passion for music and photography is matched only by his love for his wife, dog and the Leafs.
RELATED ARTICLES
album reviewschanging coloursi've got a hole where my heart should be
9.0