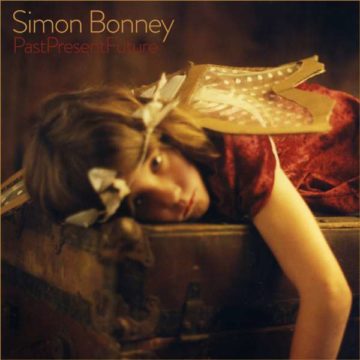 Simon Bonney is a genius, just not a prolific one. Since leaving Crime and The City Solution in 1992, he has released two solo albums. Crime and The City Solution released five studio albums. This is not a criticism, it is just that when an artist is this good and his music is this brilliant, you want more. The new album, Past, Present, Future is a compilation of his two solo  albums as well as previously unreleased solo material. All the songs were handpicked by Bonney himself.

Bonney’s music is beyond compare and very difficult to explain to the uninitiated. It is a cross between Americana and alternative pop. For Bonney, it is the perfect combination. If the Southern Gothic genre of books needed a soundtrack, Bonney would be the man to call. Guitar-based, layered, and downright melodic. But also melancholy. For me the interesting thing is that all the music found on this compilation was recorded once he had moved to Los Angeles. Australia was far behind by the time he came up with these songs, most of which are about everyday life for the working man, are written from an outsider’s perspective. Again, lyrically and musically this works.

The Everyman album (1995) is heavily favoured on this album, which is fine by me. Both of his solo albums are treasures, but in this context it works alongside the newer/previously unreleased songs. Also featured is the complete version of “Everyman”. Previously heard in segments on the album of the same name, but here it is presented in all of its glory.

The tracks have been heard previously on his Myspace account, but it is nice to have them in this format. The songs are equally brilliant and fit together nicely with the older material. The album ends with the sombre “Can’t Believe Anymore”. Starting off with just Bonney and an acoustic, and building. He creates a moving, and emotional  noise to drive the point home. It is a fantastic example of his genius and the reason one wishes he had released more albums/singles.

Given the name of the new album, Past, Present, Future, one hopes that Future means more songs/albums from Bonney. This album is a wonderful stop gap and a great opportunity for others to catch up. However, were it not for the new songs, I would say to stick with the original albums. As with this album, there is not a weak moment to be found.

Born and raised in Whitby, Aaron discovered music through his love of The Beatles. This led to a career in radio, writing for various publications, and ultimately a radio show about The Beatles (Beatles Universe), which ran for over four years. When not immersed in music, Aaron enjoys spending time with the loves of his life -- his wife Andrea, and daughters Emily and Linda (all of whom have an intense love of music too).
RELATED ARTICLES
album reviewalbum reviewscrime and the city solution
8.0