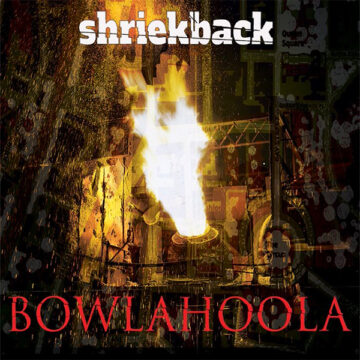 Shriekback was formed in 1981, and now in 2022 the band’s core is Barry Andrews (one of the founders of the band), Carl Marsh (who has been with the band since the beginning) and Martyn Barker (who joined the band in 1983 as their drummer). Over the years members have come and gone, but this basic trio has been the core since 2015. And this line-up has been very prolific. Bowlahoola comes roughly a year after their last and incredible studio album 1000 Books. Not to mention the numerous  other releases of live and previously unreleased material since, so the output from the Shriekback camp has been plentiful and always great.

Bowlahoola is no exception. The album is classic Shriekback. The title comes from William Blake’s mythical city “Golgonooza” (a city of imagination)  in which Bowlahoola is the furnace in the middle of the land, which is also known  as the organs of the animal man. This is heavy stuff indeed and something very different upon which to base an album. And yet Shriekback can reference this and turn it into an incredible work. However, lyrically, the album is full of rather grim images. Musically, it is just plain brilliant.

They have the ability to produce music that is instantly recognizable as Shriekback without getting stuck in a rut. They create incredible songs and take turns and twists that are not anticipated. They also jump right into the action. The album opens with “Doo-Dah Room”, which sounds fun, but this room is downright frightening. This is sort of their version of Orwell’s Room 101. Musically, it is driving and full of interesting layered sounds. The same can be sad for track two, “Baby Floods The Zone.” In some ways this is their “Baby’s On Fire”. It works and it is a fantastic song that grinds away into the listener’s psyche. They create mood and sound images that fit the lyrics and overall feel of the album.

They use different syles and branch out into different techniques., like “Churn”, which is an electronic breathing room. The same can be said about “Ambergris”, which is musically much more restrained and electric-based.   But for the most part musically and lyrically Shriekback are painting a rather dismal picture of today and they don’t really see a grand future. This is all summed up in the closing track, a work of art, titled “We All Lie Down In The River”. Here we are told “It’s a dodgy world that’s out there and the ugliness abounds…But the river’s full of noises: there’s a million pretty sounds (it’s better if we all lie down)”. Not exactly hopeful but it does bring everything together in the end.

Shriekback just keeps getting better. In the last five years, they have produced some of their finest work. They are constantly moving forward musically and tend to approach their lyrics with such depth that it takes multiple listenings to fully get what they are saying. Mysteries continue to be unraveled with 1000 Books a year later, the same will be said about Bowlahoola. It is an album that needs to be listened to from beginning to end and one should devote as much attention as possible to the work.

Born and raised in Whitby, Aaron discovered music through his love of The Beatles. This led to a career in radio, writing for various publications, and ultimately a radio show about The Beatles (Beatles Universe), which ran for over four years. When not immersed in music, Aaron enjoys spending time with the loves of his life -- his wife Andrea, and daughters Emily and Linda (all of whom have an intense love of music too).
RELATED ARTICLES
album reviewalbum reviewsshriekback
8.0