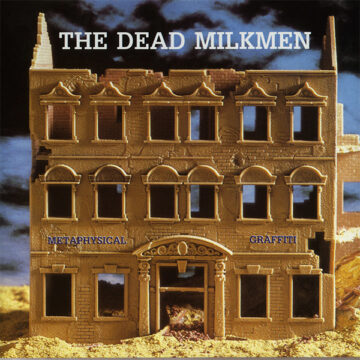 When I was 14 years old, my dad joined some mail order record club where you’d get 10 to12 albums for mere pennies with the agreement being that you buy the same amount at market price over a certain period of time. I was given a few choices and among those was the Dead Milkmen’s 1988 album Beelzebubba. Going in cold, I was taken by the band’s weird jangly form of punk, an almost anti-punk that didn’t so much rally against the corporate wheel as they did spin ridiculous tales about ridiculous characters and even more ridiculous scenarios with a very thin underlying sense of politics and kicking against the current ideologies.

The band’s follow up album, Metaphysical Graffiti, didn’t enjoy the same praise as its predecessor but showed an arc in their musicianship and even boasted a bit more of a “serious” bent. This past month, Metaphysical Graffiti was given a limited Black Friday Record Store Day remastered vinyl reissue along with a few bonus tracks and collectibles. While this album wouldn’t be my first choice for a reissue and I probably wouldn’t recommend it as a starting point for the uninitiated, it’s still a fun romp and has some sweet spots such as

the opener “Beige Sunshine”, a trippy clever little tune about stepping out of the dull lemming existence and embracing a more realistic and authentic one, and the addition of the children’s choir really adds a very “Milkmen” flavour. “If You Love Someone Set Them on Fire” and “Methodist Colouring Book”  are definite standout tracks and the previously unreleased 4-part stream of consciousness spoken word bit called “The Earles” is truly bizarre and a good laugh when you’re in need of some foolish storytelling.

I once heard Dead Milkmen described as being “playfully offensive” and I couldn’t think of a better way of putting it, because even though some of their content has indeed been offensive (read “Takin’ Retards To the Zoo”) they’re just too ridiculous and playful to be offended by.

It took the recommendation of a best friend to get me into the pages of music magazine writing. Armed with the deepest appreciation for all the music, a ridiculous sense of humour, and the apparent ability to string a few words together, these fingers started giving. Who knew it would become one of my favourite things many years later and that I'd enjoy seeing my works published the world over?!
RELATED ARTICLES
album reviewalbum reviewsthe dead milkmen
8.0