Album Review: Pop Will Eat Itself – Chaos and Mayhem 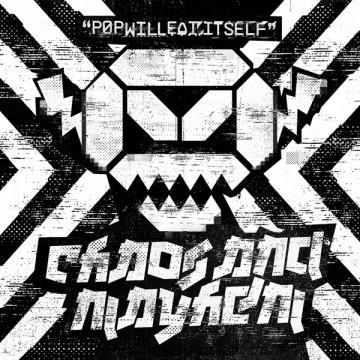 Pop Will Eat Itself
Chaos and Mayhem
Metropolis Records/Cooking Vinyl

“Pop will eat itself” is a quote from a NME article, by David Quantick, which over the years became something more than a statement – it became the name of a Punk band.

PWEI, who proved to be quite influential, are kind of marking time with their new album, New Noise Designed By A Sadist. However, they are not very convincingly standing up for their name, which suggests that Pop music seems to be existing in a vicious circle, recycling old ideas. In recent years it seems as if the likelihood that ‘punk will eat itself’ is becoming more and more probable. With their new album, the band, which now possesses only one of the original members, Graham Crabb, has tried to run away from the contemporary Punk music sound that has flooded the market.

If the album, as a whole, is far from the perfect comeback, the single “Chaos & Mayhem” shines bright among all the other songs on the album. It has a catchy, vital melody and easy to remember lyrics, though it sounds more like a nice, neat Alt-punk song than the ‘chaos and mayhem’ that we’re used to hearing from Sex Pistols or the Clash – but it is addictive and satisfies my basic listening yearnings.
Two boys from Yorkshire, known as Asbo Kids, obviously really like PWEI’s single as they made two remixed versions of it. The remixes can be described as a male vs. female version of the song. One keeps the original Graham Crabb’s vocals, while the second one is a co-operation with Snovonne. The later turned out to be a successful attempt to reinvent the Punk song into an eclectic mixture of Electronic and Punk sound combined with gothic Metal vocals. Snovonne brings to the mix obscure and gentle female touch that successfully manages to keep the essential and yet give a new, fresh perspective to “Chaos & Mayhem.”
This single release is a proof that with a little desire for originality you can mix styles and genres and create something good.

Album Review: Pop Will Eat Itself – Chaos and Mayhem