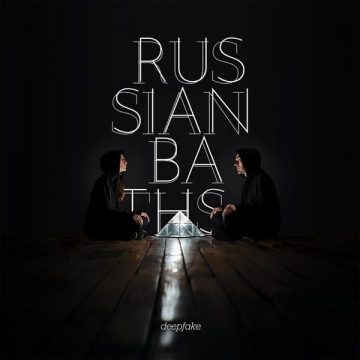 First albums are always difficult, bands are finding their way and don’t always get things right their first time in studio. The interestingly-named Russian Bath hails from New York, and provide for their debut an album that is in part a horror soundtrack, and in part introspective. Jess Rees and Luke Koz on guitar and vocals comprise the outfit, and they are joined live by Kyle Garvey on bass and Steven Levine on the drums.

It is for the most part (but not entirely) instrumental, with the vocals largely downplayed in the mix to the point where they lie somewhere distant. I admire the drum work of Steven Levine, and the album holds a tight and evocative rhythm. Musically very tightly-crafted, I believe it was two years in the making, but it makes me think that it would have been better if it were a bit more spontaneous in places. “Guts” and “Ghost” are both tracks I like. “Guts” reminded me of the background music for Dracula in the classic book when Dracula’s ship crashes on to Whitby shore. “Ghost” was evocative and connected to me as a listener as well.

Some of the tracks were a little too on the dark side for me, and although perfectly sound background music, it never really became a main event. I appreciate it, but sometimes the production mix was unhelpful.

I actually really hope that the band succeeds, that they go on and make many more albums. The energy in their live performances is clear.  At present though, things are a little overworked and dark music needs a bit of light too.

The Spill Magazine is a Toronto-based online publication dedicated to covering the independent music scene with a strong focus on our thriving hometown talent. Our writers bring you up-to-date news, in-depth features on musicians and reviews for the latest CD releases. We also travel to the front lines for all local festivals including Canadian Music Week and North by Northeast. Don’t forget to check out our Facebook and Twitter pages for all daily Spill updates.
RELATED ARTICLES
album reviewalbum reviews
10