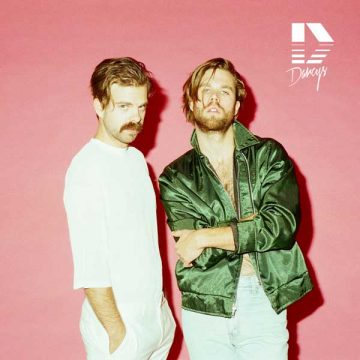 Sometimes a band needs to make some big changes to keep heading in the right direction. Darcys took a risk back in 2014, after hitting some hard times with their four-piece rock band at the time, when deciding to shift the dynamic of the group and reform as a duo. Jason Couse and Wes Markell make up Darcys, and being the only two founding members, the most notable shift made on their new album Centerfold is not so much a lineup change, but actually the alteration and addition of certain musical elements. Darcys traded in a couple guitars for a few more synthesizers and drum pads, and show us how well they can incorporate 80s pop aesthetics into their already polished sound. Centerfold is a ten track collection of ultra-catchy retro rock songs, with a pop supercharge. The group has always been great at producing big atmospheric songs, but Centerfold takes their polished production style and pushes things even further resulting in something new and exciting for the group, something hard-hitting, glossy, funky and anthemic.

The album kicks off with a strong track, “Studio City”, getting things going with an electronic beat straight off an 80s drum pad. Bold synthesizers stand out as primary throughout this tune laying ground work for Jason Couse’s powerful rock vocals. All leading into a great sing-along chorus. “Studio City” is a high-energy introduction to the new Darcys. The guys keep an up-beat steady tempo throughout most of the album, with consistent pop tracks worthy of any California penthouse party. Funky textures are well layered into many of these tunes, with a vintage bass chiming in on the back beat to develop great rhythms reminiscent of fellow Canadian funk lovers, Chromeo. These funky beats and rhythms are showcased on some other really strong pieces, such as “Miracle” and “Virtual Reality”. Darcys slow things down a bit on a few tracks too, opening up the space and creating more atmosphere on tracks like “San Diego, 1988” and “Arizona Highway”. Both tunes, however, still build to big choruses. Huge hooks and live potential seem to be top of mind for the guys on this album, as every track almost seems like it was composed specifically for a raucous crowd sing-along.

Another stand-out track on Centerfold is “Black Diamonds”. This tune showcases some elements that aren’t used too extensively on the rest of the album. Opening with a snappy funk-fueled guitar phrase that sounds almost like they transcribed an old slap-bass lick. The song continues with the addition of some intense robotic voice modulators, creating a really great vibe. This track also features the most falsetto vocals on the album which really blend into the groove effectively; and the contrast between these more tender vocals and the rock vocals that are featured in the chorus makes the latter sound that much bigger.

Centerfold is a trip from start to finish. We are effectively introduced to the nostalgic values of the album immediately, and this solid collection of rock songs does undoubtedly deliver. These songs were written for having a good time, so crank it at your next party and go see these guys live so you can finally belt out those hooks that’ve been stuck in your head.

Growing up in the dull suburbs of Southern Ontario, Elijah gravitated towards the city at a young age. With a healthy addiction to live music, and a constant itch for discovering his new favourite band, he finds himself happily submerged in Toronto's music scene. With his work appearing thus far in Sock Monkey Sound, and The Spill Magazine, he's going to keep this writing thing going for a while.
RELATED ARTICLES
album reviewsarts & craftscenterfold
9.0