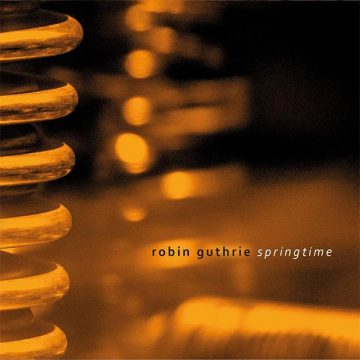 On January 4, 2022, former member of The Cocteau Twins turned 60. To celebrate, he released a brand new EP titled Springtime, his third since November 2021. An interesting title, given it is being released in the dead of winter, still hopeful thoughts are always welcome. This is his third since November, 2021 and in between the E.P.s, he also managed to release his first album in nine years (Pearldiving). Mr. Guthrie has been a very busy artist, and quite frankly, we all benefit from his work ethic.

Guthrie plays all the instruments and produced it himself, and the result is a stunningly beautiful. It is full of incredible textures and layers. He is able to evoke emotion and feeling from the bare basics and creates moods with his production and textures.

Springtime opens with “Kino’s Chance”, which is a bit moody, darker and heavy. It has a sense of melancholy, and although it is still beautiful, it does leave the listener with a sense of sadness. By the fourth and final track, “All For Nothing”, the mood has shifted. This is a light, airy song that feels like the namesake, and the genius of Guthrie is the slow and almost unnoticeable way in which he gets to that point. There is no jarring shift, the four tracks flow into each other and gradually change the mood and light of the music.

That is not to say that there is a sameness to the music, quite the opposite, because Guthrie has the ability to make it all fit together. It is his ability to let the music flow in and out of each song with the end result being a cohesive and consistent release. It is not easy to create instrumental music that captures the attention of the listener and keeps them glued to the music, but Guthrie does just that.

Springtime is another success for Guthrie. It draws the listener in and brings them into a place of warmth and hope. Fans of his previous work will welcome this with open arms, others, who have not dived into his music will be thankful they did.

Born and raised in Whitby, Aaron discovered music through his love of The Beatles. This led to a career in radio, writing for various publications, and ultimately a radio show about The Beatles (Beatles Universe), which ran for over four years. When not immersed in music, Aaron enjoys spending time with the loves of his life -- his wife Andrea, and daughters Emily and Linda (all of whom have an intense love of music too).
RELATED ARTICLES
album reviewalbum reviewsrobin guthrie
9.0