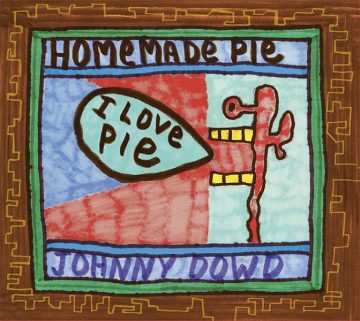 Johnny Dowd has been making music for a very long time, and he continues to attract new fans with his own brand of country-rock. He went solo in 1995 after fronting both The Jokers and Neon Baptist. Since then he has recorded 17 studio albums. Here, country mixes with garage which mixes with blues which mixes with rock. It makes for fascinating listening.

Homemade Pie is an album of personal observations and experiences.  Whether or not he has lived each of these, he certainly convinces us he has. This is an artist who is not interested in massive appeal but one who is creating because he has no choice.

Dowd has a remarkable backing band, which includes longtime collaborators Mike Edmonsdon (guitar, keyboards and vocals), Willie B (drums) and the wonderful Kim Sherwood-Caso who provides stunning vocals. But the star of the show is clearly Dowd. His growling, pacing vocals come at the listener almost with a vengeance.

It is clear that Dowd has a lot to give to the listener. This is 13 tracks of pure honesty and emotion. Without wanting to steal the spotlight, he just does. He tells stories, but not in the traditional sense. He creates images with but a few powerful words