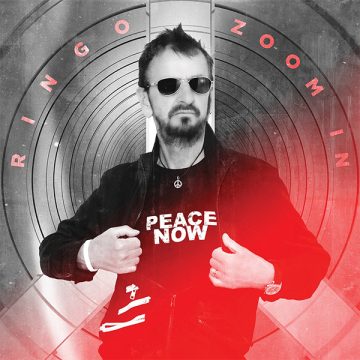 Ringo Starr’s latest release, Zoom In, comes as a bit of a surprise. The first single, “Here’s To The Nights”, was released just before Christmas with little or no pre-press. It is a bit odd because a new song or release from an ex-Beatle is always huge news, bringing huge expectations. With Zoom In, Ringo has not only met these, but exceeded them. It continues in Ringo’s pattern of strong releases.

For whatever reason, Starr has decided to release Zoom In as an extremely strong five-track EP,  He made a great choice as there is not a weak moment to be found. It kicks off with the star-studded single “Here’s To The Night”, an emotional song featuring Paul McCartney, Joe Walsh, Finneas, Sheryl Crow, Chris Stapleton, Lenny Kravitz, Ben Harper, Dave Grohl, Jenny Lewis, Corinne Bailey Rae, Eric Burton, and Yola. The song also features Toto’s Steve Lukather, the Heartbreakers’ Benmont Tench, Bruce Sugar, Nathan East, Charlie Bisharat, and Jacob Braun. Fantastic lyrics, strong melody and incredible performances, what more do you want or need? It should go down as a classic.

This is followed by the title track, “Zoom In Zoom Out”, which Starr wrote with Jeff Zobar and features Robby Krieger of The Doors. It is a solid rocking song, again featuring strong lyrics and a strong vocal performance from Starr.  Sam Hollander wrote and produced “Teach Me To Tango”, which features fantastic drumming from Starr, lest anyone forget that he is the master of the drum kit. It is somewhat different for Starr and has a definite Latin feel to it. It is kind of a long overdue to Starr’s 1977 song “Tango All Night”.

Starr and Bruce Sugar, who has worked with Starr for a number of years as his engineer and co-producer, follow “Teach Me To Tango” with the reggae-influenced “Waiting For The Tide To Turn”. Again, a little different for Starr, and yet it works perfectly. Starr has been a fan of reggae for many years, so it is great to hear him record in that genre. The EP comes to a close with “Not Enough Love In The World”, written by Steve Lukather and Joseph Williams. A perfect way to end.  Lukather provides searing guitar and it all comes together with a great horn arrangement.

Zoom In is fantastic, I only wish it had been a full album, but as it is, it is pretty darn perfect.  Starr invites his famous friends to help out, but it is clearly his project.

Born and raised in Whitby, Aaron discovered music through his love of The Beatles. This led to a career in radio, writing for various publications, and ultimately a radio show about The Beatles (Beatles Universe), which ran for over four years. When not immersed in music, Aaron enjoys spending time with the loves of his life -- his wife Andrea, and daughters Emily and Linda (all of whom have an intense love of music too).
RELATED ARTICLES
album reviewalbum reviewshere's to the night
8.0