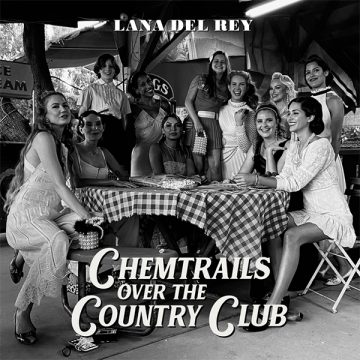 There are two things Lana Del Rey doesn’t shy away from. One is saying exactly what she thinks, the other is trying to come up with best music she can. From the moment she appeared on the scene, both have raised controversies with different levels of intensity.

That has not prevented Del Rey of coming up with music that has grown in stature. Simply put, she’s got the touch, whether you like what she’s got to say or not. And it is music you cannot ignore — it is good. Chemtrails Over The Country Club, her latest, is no exception.

Even more so, her releases seem to get stronger and stronger, as she keeps spreading her musical palette into different directions without losing the identity she initially came up with. Here, she moves away from the early ‘60s widescreen productions to a more intimate, almost whispering style and some intricate background vocals, with the cover of Joni Mitchell’s “For Free” completing the overall singer songwriter vibe.

Will she create controversy again? You can be sure of it. Will she come out unscathed? Who knows. After all, she has already announced a follow up release, another point for a Lana Del Rey debate. But does she come up with some damn good music? She most certainly does.

Formerly a lot of things, including a journalist and a translator, currently a freelance writer living in The Netherlands.
RELATED ARTICLES
album reviewalbum reviewsinterscope
7.0