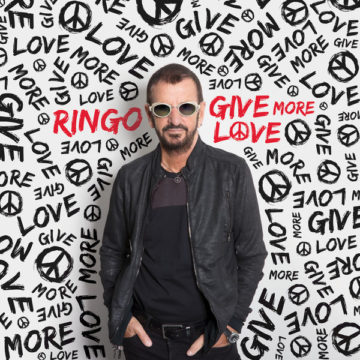 Give More Love is Ringo Starr’s 19th solo album since The Beatles disbanded. People forget that at the time of The Beatles break-up, Ringo was not the odds on favourite for a successful solo career. His first two solo albums, Sentimental Journey and Beaucoups of Blues, although brilliant and years ahead of their time, did not set the charts on fire. But beginning in 1971, with his top ten single “It Don’t Come Easy”, Starr became the most successful Beatle for the first half of the 1970s. He has continued to make extremely brilliant music ever since, and in the last few years, Ringo has not taken more of a creative control of his albums.

Give More Love picks up where his last studio album, 2015s Postcards From Paradise left off. Using many of the same musicians from his last album, and several from his current All Starr Tour, Ringo has returned with an album containing a few surprises.  Getting a great deal of attention is the fact that Paul McCartney plays on two songs, the rocking “We’re On The Road Again” and the ballad “Show Me The Way”. McCartney and Starr have guested on each other’s albums several times going back to Starr’s Ringo album released in 1973. Although it is not a huge surprise, it is nice to hear the two Beatles playing together again and they sound fantastic.

Ringo teams up with former All Starrs, such as Peter Frampton and Joe Walsh, and even Dave Stewart makes a return. Ringo gets a chance to co-write with these artists, as well as Steve Lukather, a current member of The All Starrs.

Since 1997, Ringo has co-produced his albums. As with his last album, he is producing it on his own, and even had a hand in mixing it, with long time collaborator Bruce Sugar. Ringo has learned a great deal about production over the years, and this album sounds fantastic. Nostalgic, yet current, and the mix is perfect. This is quite an accomplishment when you are mixing some of rock’s legends playing together. Yet Ringo does, and the album sounds like a group project throughout.

The songs are what you would expect from Ringo, straight rock and roll and some ballads. Lyrically the songs range from peace anthems (one of the many highlights “Give More Love”), love songs (“Show Me The Way”) and autobiographical songs (“Electricity”). While Ringo is not often recognized for his lyrics, here he shows that he is a sensitive individual concerned with the world around him. His solution, like John Lennon’s, is peace and love — a mantra he has been chanting since 1989. This man is about peace and love, and this is expressed in his music. In these days, how can one argue with this sentiment?

A new release from Ringo is always worthy of a celebration, but what makes this album a little more special from his last album are the four bonus songs. A new version of “Back Off Boogaloo”, based on the original writing demo Ringo recently found when moving house. Along with Joe Walsh and Jeff Lynne, he has built a new version which also includes clever use of the original 1972 release.

Ringo also works with the indie artist Vandaveer to record new versions of “Don’t Pass Me By” and “Photograph”. While neither top the originals, they are both fresh and vibrant and sound stunning. He also enlists Anglo-Swedish rockers Alberta Cross to record a new version of the obscure song “Can’t Fight Lightning”. Again, not as good as the original 1980 recording, but new and different life is breathed into the song and it is a welcome addition to Give More Love.

Ringo Starr is 77, and currently touring. He has toured more than any other Beatle, and continues to issue a new album every other year. This year will also see the release of two older albums on vinyl. One, Bad Boy, has been out of print since 1978, and the other, I Wanna Be Santa Claus, has never been on vinyl. Lots for Ringo fans, and a lot to keep this man active. I fully expect to be reviewing an album when he turns 79.

Until then, there is plenty on this album to keep fans happy. It is a brilliant album, and I can only imagine how good these songs will sound when performed live on his current tour (he has been with the same All Starr band since 2012, which is the longest standing All Starr band ever). Give this album a chance and the love it deserves.

Born and raised in Whitby, Aaron discovered music through his love of The Beatles. This led to a career in radio, writing for various publications, and ultimately a radio show about The Beatles (Beatles Universe), which ran for over four years. When not immersed in music, Aaron enjoys spending time with the loves of his life -- his wife Andrea, and daughters Emily and Linda (all of whom have an intense love of music too).
RELATED ARTICLES
album reviewsringo starr
7.0

by Samantha Andujar on January 24, 2020
Wolf Parade Thin Mind Royal Mountain Records/Sub Pop In a rock world where most of our bands are drifting to harder sounds yet combining other genre influences to create a different [...]
7.0