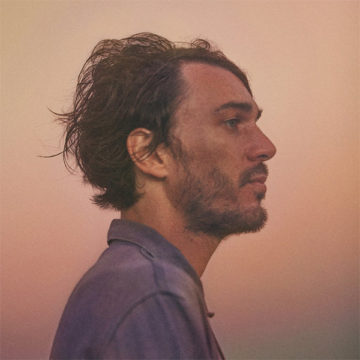 This is Richard Edwards’ first solo album since his departure from Margot and The Nuclear So and So’s (one hell of a good name for a band).  It would seem that last year was just not a good year for Mr. Edwards.  His marriage ended, he lost his house, and he contracted C Difficile, which took him out of commission for much of the year.  All of this and more lead to the creation of this album.

He recorded Lemon Cotton Candy Sunset (available from Joyful Noise) in Los Angeles with Rob Schnapf producing (he produced Elliott Smith and Cass McCombs).  He also had some help from former Attractions drummer (Pete Thomas) and Mike Bloom who had worked with Edwards in Margot and The Nuclear so and So’s.

The fact is he started recording the album a couple of years ago and had to stop due to a potentially life threatening illness (C Difficile).  But, in true Edwards style, some of those songs were scrapped and he continued writing and recording as soon as he was well enough.

The result is an interesting and at times very disturbing album.  This man lived some nightmares and he is exorcising some of these demons through his music.  The themes of loss, despair, being alone, and yes, mortality pop up throughout the album.  His almost angelic voice makes it that more unbearable.  This is the sound of a man, very much alone, and trying to cope.

“A skinny little beach bum, flowers in your crown, where are you, I need you now…” he sings in the closing track, “Moonwrapped”.  “Why do you love me, I think you are insane…I am seeing things I cannot explain” he goes on in the song.  Edwards tackles subjects not often found in pop music.  The song ends with the sounds of a man coming in from outside, tinkling piano and very lonely “oh”.

“When you get lost inside your dream, that’s when it all goes wrong”   Richard sings in “When You Get Lost”.  His dreams of a sold out tour, a band, a family, of everything disappeared when he was diagnosed.  It is not often that an artist opens up but in this case, he opens an artery and lets it pour out.

Musically, he taps into Beatles, pop, alternative, folk, but truthfully it is very difficult to compare his music to anything.  Schnapf is a smart enough producer to let Edwards do what he does best.  He lets the music breathe with a great deal of space.  It is not over produced and, in fact, this space adds to the rawness Edwards sings about.

This is a stellar album, and the coloured vinyl is just the icing on the cake.  Joyful Noise knows how to package records.  Lemon Cotton Candy Sunset may not be easy listening (it is more uneasy listening), it is a work of art. This is an artist expressing himself through his art, in true sense of the word.  Van Gogh may have lost an ear for his art, but this man almost lost his life and is willing to sing about it.

Born and raised in Whitby, Aaron discovered music through his love of The Beatles. This led to a career in radio, writing for various publications, and ultimately a radio show about The Beatles (Beatles Universe), which ran for over four years. When not immersed in music, Aaron enjoys spending time with the loves of his life -- his wife Andrea, and daughters Emily and Linda (all of whom have an intense love of music too).
RELATED ARTICLES
album reviewsjoyful noise recordings
9.0