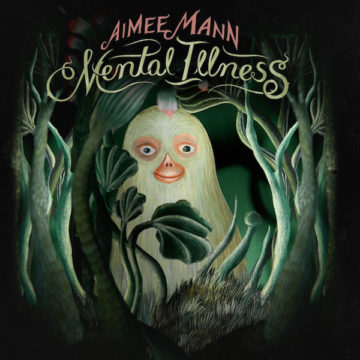 A new release from Aimee Mann is always an important event.  Since leaving, and disbanding ‘Til Tuesday in 1988 They went out with a bang with the incredible album Everything’s Different  Now which is one of my favourite albums of that decade, she has written, produced and created some of the most thought provoking, emotional and smartest albums for the last two and a half decades.

And for pure pleasure find her episode on Portlandia, sheer brilliance.

On this album, she tackles, as the title suggests, Mental Illness (on her own label, Superego).  This album is a stark look at the world and the human condition.  Much like some of the greatest songwriters, Mann tells stories, some personal, some as an observer, but all of the songs have a point and pack a punch

Mental Illness is her first album in five years (her last being 2012’s Charmer, an equally brilliant title), and she has not lost any of her talent or knack for writing beautiful melodies along with thought provoking lyrics.  “Stuck in the past, I plan it only on paper” Mann sings in “Stuck In The Past”, “Guess I am the last, a  living memory of vapor” she concludes.  Much of the album is about regret, the past and dealing with those things in life that you just can’t go back and change.

Given the tone of the lyrics, the acoustic playing and the pacing of the album, I would not expect this to be on the barb-b-q playlists this summer.  This is a sit down, get comfortable and listening album.  And given it’s length, just over thirty-eight minutes, it is time well spent.  And she nevers wears out her welcome.  She knows that albums can be under an hour and are usually better off for it.

Producer Paul Bryan, who has produced her albums since her 2005 Christmas album, One More Drifter In The Snow, knows how to produce Mann.  He lets Mann do what she does best and uses the backing musicians/vocalists effectively to highlight Mann.  It is a beautifully produced album.  Featured on vocals on this album is Ted Leo, who recorded an album with Mann as The Both.  Their self titled album was  released in 2013.

After so many albums and songs, it is hard to imagine that she just keeps getting better, but she does.  Mental Illness is a brave, beautiful album and one that she probably could not have made early in her career.  She has learned throughout the years, and this has lead to this point.  But this is not her peak, she will continue to grow and produce brilliant work.  In the meantime, this album will do, and it is an album that begs for repeated listenings.

Born and raised in Whitby, Aaron discovered music through his love of The Beatles. This led to a career in radio, writing for various publications, and ultimately a radio show about The Beatles (Beatles Universe), which ran for over four years. When not immersed in music, Aaron enjoys spending time with the loves of his life -- his wife Andrea, and daughters Emily and Linda (all of whom have an intense love of music too).
RELATED ARTICLES
'til tuesdayalbum reviewsred music