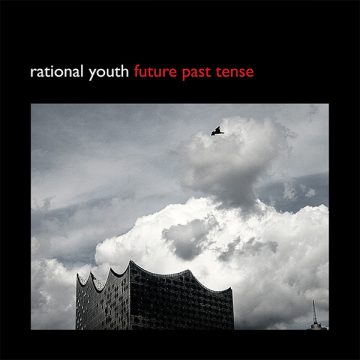 If you’re part of the Alternative Electronic music community in Canada today, know well that you owe your scene’s existence to pioneers like Tracy Howe and Bill Vorn. Rational Youth were proudly baffling stage managers with their 808 and MS-20 setup in the early ‘80s, and telling the world to dance atop the infamous wall three years before Bowie started inciting riots in East Berlin. Howe’s relentless ambition to reclaim the synthesizer out of the hands of boring scholars and put it at the forefront of the concert stage produced a novel and visionary experience for listeners around the globe.

Listening to Future Past Tense is like popping open a 1980s time capsule brimming with telltale signs of social unrest. Those youth that danced in dark, smoky clubs to the first machine-produced musical beeps are still among us. They are the ones who spoke with idealism in their visions of the new millennium. They know the price we paid for a brighter future, and they can see what it bought us. Hopefully they’re listening to this album right now because it continues to speak to them and their successors alike along clipped synth waves:

Rational Youth has gone through a few permutations, and snowballed influences from every subsequent troupe that accompanied Howe. Yet fundamentally the sound remains unchanged and Future Past Tense is a perfect successor in the lineage of the band’s brilliant simplicity. Synthpop has had scores of icons since its inception, but none rival these progenitors, because few were there, in the heat of the moment when this style blossomed on Canadian and international stages. Rational Youth nailed the formula for this genre 30 years ago, so it should be no surprise that their new release is a stellar addition to the style’s legacy.

The new album sees the addition of Gaenor Howe on vocals, after she toured with the band in 2014 and played a glorious return show in Montreal. Her vocals are the defining distinction in this chapter of Rational Youth history. The gloomy aria in “Here It Comes Again” is mesmerizing, a perfect complement to the buoyant beat and her backup vocals in “This Side of the Border” are filled with a wonderful melancholy. Rational Youth retain a polished chrome retro-futuristic edge that withstood the test of time and is as welcome on today’s stages as in the heyday of Depeche Mode and Kraftwerk.

Here's what we think...
Spill Rating
Fan Rating
Rate Here
New Criteria
10
9.0
8.0
Total Spill Rating
9.0
Total Fan Rating
You have rated this
Album Reviews
bill vornfuture past tensehere it comes againrational youthsynth-popthis side of the bordertracy howe
bill vorn, future past tense, here it comes again, rational youth, synth-pop, this side of the border, tracy howe
About the Author
Synescape

I’m a geeky weirdo with her fingers in all sorts of pies. I paint and illustrate all sorts of nonsense, I make strange noises. I rant and rave, set things on fire, I’m an awesome cook and I throw a mean party.
RELATED ARTICLES
rational youthsynth-popthis side of the border

by Aaron Badgley on December 9, 2019
COLD WAR NIGHT LIFE A CONVERSATION WITH TRACY HOWE OF RATIONAL YOUTH Those of us of a certain age will remember scouring the record stores of [...]
9.0

by Susana Meza on April 1, 2017
Rational Youth w/ YlangYlang @ This Ain’t Hollywood, Hamilton April 1, 2017 When a good friend casually mentioned that she was going to head down to [...]